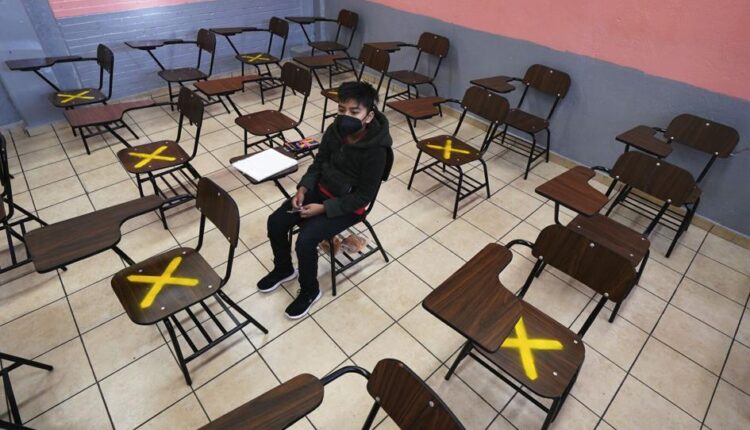 The school officially begins “personally, responsibly and in an orderly manner,” according to the Ministry of Education.

In practice, it will be a voluntary, diverse and hybrid system between face-to-face learning and virtual teaching in structures that some describe as chaotic and others as gradual. Thousands of schools will open their doors after a year and a half of closure, but it is not clear how many will and how many students will appear because beyond federal, state and local regulations, the final decision will be made by schools and parents.

“There is complete uncertainty about how things will go next,” said Bettina Delgadillo, director of a private school in San Pedro Garza Garcia in Nuevo Leon, the richest community in Mexico.

“There are schools that are better prepared and safer for children than supermarkets or facilities with open tables,” she said. “But I understand that it is complicated for authorities to say ‘yes here’ and ‘no here’.”

At the other end of the country, in Chiapas, the poorest state in Mexico, elementary school teacher Enrique Morales also faced other problems. “They haven’t cleaned a lot of schools and it’s up to parents to intervene to buy gel and everything else,” he said.

Around Simojovel, where Morales teaches, the parents still hadn’t met to decide what to do, but it was clear to him that he didn’t want to take his two children into the classroom. Chiapas has the lowest COVID-19 alert level in Mexico – the only green state in the country’s coded system – but he buried his father in January and his father-in-law a few days ago.

The new school year begins at a time when Mexico is in the middle of its third wave of COVID-19 infections, with more than 380,000 COVID-19 confirmed deaths. About 64% of the adult population have received at least one dose of vaccine, but very few children are vaccinated.

“Going back to school doesn’t necessarily mean a greater risk for the children returning to school, nor for the community,” said Miguel Betancourt, a public health expert. However, you need to maintain basic hygiene, vigilance, and ventilation, and be ready to make constant adjustments if necessary, according to UNICEF and the Pan American Health Organization.

Conditions vary in Mexico. In some schools children are registered with scanned QR codes and their teachers regularly receive quick tests. Others even lack running water. But educators in both types of schools, such as Delgadillo and Morales, agree that while children need protection, distance learning is not enough.

“We will do everything we can to ensure that the children come for two or three days because the other option did not work,” said Morales, the teacher in Chiapas. “But the government has to clean the classrooms.”

Mexico has more than 30 million students, including 25 million in primary education. They make up a significant proportion of the 100 million children who have suffered school closings across Latin America in the past year and a half. The region already faced existing barriers that left many of its students behind their peers in other parts of the world. UNICEF regional advisor Vincenzo Placco warned that the pandemic would exacerbate the learning crisis in the region “with long-term consequences for the development of an entire generation of students”.

Placco said schools should be the last to close and the first to reopen as they are often safer than children’s homes.

In Mexico alone, 5.2 million students failed to enroll in the past semester due to problems related to the pandemic or lack of resources, according to the country’s interior ministry, which also warned of an increase in domestic violence and suicides among minors.

The gradual reopening and constant re-evaluation will be crucial. Campeche, in southeastern Mexico, was the first state to bring students back to the classroom in April. But it had to stop when the infections increased. Now state education authorities are saying there have been lessons: better training for teachers and parents, trying to keep teachers in the communities where they teach so there is less mobility, and Friday to do touch-ups for students who fall behind are to be dedicated.

The federal government eventually rejected the idea of ​​getting parents to sign a letter confirming that it was their decision to send their children to school. Many viewed an attempt by the government to shirk responsibility for providing safe learning environments.

Morales said in Chiapas that they will ask parents to sign because teachers don’t want to be held responsible if infections occur. In Mexico City, many private schools require that students bring a signature every day stating that the student will not show any symptoms of the disease.

“Everything scares you,” says Rosario Plácido, who sells quesadillas and has a 5-year-old daughter and a 14-year-old son. “The disease is scary, but if you don’t go, you don’t learn.”

Workers, parishioners and lawyers urge Congress to invest in the care industry