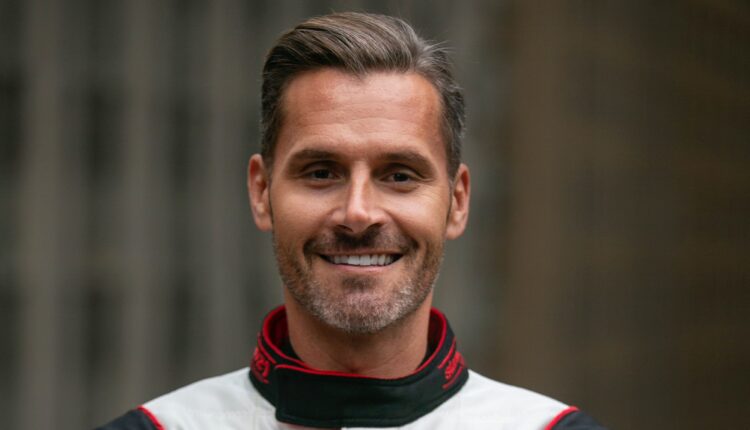 Travis Shumake hopes his success on the racetrack will help him advocate inclusivity in motorsport.
Courtesy of the Shumake family

Travis Shumake, whose father Tripp Shumake was a famous “Funny Car” driver, set out to carry on his family’s passion for racing and to become a voice for inclusion.

Travis hopes to be the world’s first open LGBTQ funny car driver to compete in the National Hot Rod Association. He wants to be a pillar for inclusivity and win new fans for a sport that is known for its conservative politics and the machismo culture that is common on the racetrack.

“I want to open a door so that people who have always been connected to the sport feel accepted, for drivers who are in the sport, or fans of this sport who may not feel comfortable talking about their sexuality”, he said.

The Shumake Family Legacy in Phoenix

Travis and his family have been deeply rooted in Arizona and the greater Phoenix area since childhood.

Tripp, the patriarch of the Shumake family, grew up in Glendale and attended Glendale High School. It was here, says Travis, that his father discovered his love for racing, which was ultimately passed on to his son.

“I found … a job my father wrote in fifth grade between 1959 and 1961 stating that he wanted to be Arizona’s first famous funny car driver,” said Travis. “His passion was all racing.”

Travis’ parents met when his mother was on a racing team and was a crew member, “which is kind of unknown for the time. She changed the tires and mixed the fuel in the oil and did it all.” of that.”

So they fell in love and moved to downtown Phoenix.

Travis and his father drove shifter karts, which are mechanically enhanced versions of go-karts used for race training.

“He’s never been able to stop racing, so much so that he stole my competitive go-go to do better than I did.

“I think the only thing I ever beat my dad about was BMX racing because I was bigger than my dad and I could spin the tires faster,” said Travis.

Travis said that by going karting together he was able to bond with his father at a transformative time in his life.

“In my teenage years, when I came out and realized I was gay was the race that kept my dad and me closest,” Travis said. “He’s a very strong Christian man and we’ve never talked about being gay. And I’ve never been out before him, but racing was our thing.”

Travis and his family continued their deep and proud roots in the Valley of the Sun. He remembered visiting the Arizona Republic offices as a child when his mother was selling classifieds for the newsp -er.

“We’ve always been a central Phoenix family,” said Travis. “There was always a shumake between Seventh Avenue and Central Avenue and Glendale. 85013 has been my zip code for 34 years of my life.”

Travis’ parents took a large shovel photo in what is now the North Phoenix B -tist Church on the corner of Central Avenue and Bethany Home Road.

“I wanted to reconnect with my father”

A recent trip to Florida filled with unforgettable anecdotes and countless memories from some of his father’s closest friends motivated Travis to make his way into racing as a funny car driver.

“Earlier this year, COVID gave me one of those moments that I make with my life,” Travis said. He went on a business trip to Florida after being invited by some racing friends.

“I could hear these cool stories about my father that I had never heard before.

“I wanted to see all of that. My father died when I was 15 and then that ch -ter stopped, ”he said. “So I wanted to reconnect with my father.”

Frank Hawley of Frank Hawley Drag Racing School told the National Hot Rod Association in June that “Tripp and Susie Shumake’s son Travis ‘participation was really special,” and “maybe the ability to drive racing cars is genetic because Travis’ is did a great job “.

We are working to increase the visibility of LGBTQ in racing

Travis’ second reason is the future of racing.

He hopes that being a gay man in the sport will enable others like him to be proud and be invited to racing events.

NASCAR and racing in general have been celebrated for their female drivers as well as African American and Hispanic world champions since the 1970s. but there was little LGBTQ visibility.

“My hope is to use my father’s legacy in sports, my desire, and my diversity to show that the sport is open and not as conservative as it may  -pear on the outside,” said Travis.

“Some of these extremely conservative, wealthy racers ran away, doubled their money for the race, and put giant Trump stickers on all of their racing cars,” said Travis.

“My friends and people who are in the sport say, ‘No, no, we have to level the playing field. That’s not true. We have to show that there is more diversity’ and I said, ‘Well, I’ I just will be that guy. ‘”

Travis hopes to show how diverse and open racing has become and he will test the track to prove his point.

As an advocate for the LGBTQ community, Travis feels the pressure to be the spokesperson for a group of people who are used to feeling out of place.

A recent accident shook his confidence. In November, while driving in the race for his professional Funny Car driver’s license, he hit a wall and broke two ribs.

“I really hit a wall at 188 mph,” he said. It was only the 18th time that he was on the racetrack in his career. “That’s pretty early for an accident,” said Travis.

“The pressure I was under was like: ‘My goodness, don’t make gays look stupid, be good. This is the only way I can break down this barrier and be a great role model in sport.” just ain’t gonna screw up and look silly. ‘

“And then I did that.

“So the pressure I actually feel was just, I feel like I’ve let everyone down. Right?

Travis knows that some privilege conferred by his father’s legacy and previous work as a development director enables him to become an advocate and address this divisive issue at One-n-Ten, a Phoenix-based nonprofit that works with disadvantaged or homeless LGBTQ youth.

One of the coolest things about Travis has been his interactions with fans that he sees while racing.

“People are going to scream my name and I’m going to take pictures with people who are gay and competing in the races and they say,” You know, me and my husband have been coming to this race every year for 30 years. And we’re just so excited to have you here. Thanks a lot for this.'”

Travis moved to New York to work at the start of the COVID-19 pandemic, but is returning to Arizona for family and business. Travis also said he recently purchased property in Pinetop that he hopes will develop and visit regularly.

Becoming a drag racer is “always the master plan,” he says.

“I always knew I wanted to do that. And it was interesting that teachers or old friends from the woodwork would come up and mention me and say something like, ‘I remember when you told me you were going to do this with your life and I just can’t believe for it to h -pen. ‘”

He hopes to continue his goal of becoming a professional driver and an advocate of inclusivity.

“There is a pressure to perform and not fall behind in motion or, as a representative of gay drivers, make sure that I say the right things and do the right things so that this door remains open.”

According to an October article by the National Hot Rod Association, Travis “made a full turn at 319.62 mph in 4.009 seconds and crashed into the record books as the fastest LGTBQ + driver in any professional motor sport.”

What does 2022 hold for the UK economy and its households? | Economic growth (GDP)