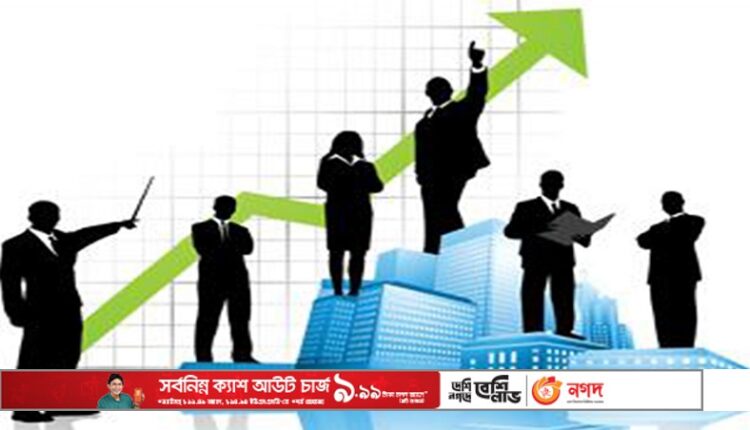 A FINANCIAL market is a platform where the trade of financial securities — stocks and bonds — and derivatives — a financial instrument for managing risk — can take place at minimum transaction costs. Other securities that are also traded in this platform include raw materials and precious metals, which are commonly known in the financial world as commodities. Likewise, there are few other products like the futures market, foreign exchange market, inter-bank lending market, spot market etc concomitant with the financial market.

The financial market is primarily composed of the stock market and the money market. A stock market, equity or share market, is the collection of buyers and sellers of stocks, also called shares representing ownership on businesses. These shares may be either listed on a public stock exchange or traded privately. The money market is the other component of the financial market which provides short-term funds, generally with a tenor of less than one year. Trading on money markets is done over the counter and is wholesale.

The term ‘market’ can be construed as exchanges, organisations that undertake the trade in financial instruments. The stock market broadly refers to the collection of exchanges and other interactions where the buying, selling, and issuance of shares of publicly held companies transpire. Such financial activities are conducted through institutionalised formal exchanges, both physical and electronic, or via over-the-counter marketplaces that operate within a defined set of regulations and guidelines.

The terms ‘stock market’ and ‘stock exchange’ are often used interchangeably, but the latter expression generally means a subset of the former. If people trade on the stock market, it entails that they buy or sell shares on one or more stock exchanges that are part of the overall stock market.

THE world’s first stock exchange arguably was established in Antwerp, Belgium in 1460. It mainly traded financial securities and primarily bonds. Brokers and money-lenders would assemble there to negotiate with corporates, government and even individual debt issues. Albeit, this remained disputed as there is little consensus among academics as to when corporate stock was first transacted. Some reckon in the historic formation of the Dutch East India Company in 1602 while others opine to earlier possibilities.

Confusion of Confusions written by Dutch-Jewish trader Joseph de la Vega in 1688 is acknowledged as the first book in history on securities exchange which states that Amsterdam Stock Exchange, established in 1602, is considered the oldest security exchange in the world. However, prominent economist Ulrike Malmendier of UC at Berkeley argues that the share market existed as far back as the ancient Rome though most tend to agree with Joseph Vega in that the Amsterdam stock exchange is the oldest. Joseph Vega in his book illustrated inner mechanisms of a stock market, taking the form of a dialogue between a merchant and a shareholder and defined a market that was sophisticated but also prone to high risks and excesses, that also offered and advised investors on topics such as the unpredictability of market swings and the significance of patience in investment.

Over the next several centuries, the stock market and stock exchange evolved and became a primary indicator of the performance of an economy both for the public and private sector. This was underpinned by c -italism taking firm ground with the development of urbanisation, increased speed of communication, worldwide growth of middle-class population and technological advancements, and investment, resultantly, poured into stock market in massive amounts stemming in creation of stock exchanges in almost in all developing and developed markets. Investments in the stock market primarily came from high net-worth individuals, pension funds, venture c -itals, insurance companies, corporates and the government, fundamentally in expectation of higher returns on their excess liquidity.

Over the years, investments in the stock market has sky-rocketed at the back of growing and profitable economy worldwide which is evidenced from the growing number of stock exchanges and the size of market c -italization itself.

By country, the largest stock markets as of January 2021 are in the United States of America (about 56 per cent), followed by J -an (around 7 per cent) and China (circa 5 per cent).

The New York Stock Exchange (NYSE, nicknamed ‘The Big Board’) is an American stock exchange founded in May 1792. It is by far the world’s largest stock exchange by market c -italisation at $28.24 trillion as of October 2021. The average daily trading value was  -proximately $169 billion.

The London Stock Exchange in its current structure was formed on December 30, 1801 after several modifications since trading began in a coffee shop in 1571. It is one of the major exchanges and claims to execute the largest number of foreign currency transactions daily.

Other than the banks extending loans and credit facilities to individuals and firms, a stock exchange, with its stated cliché enables companies to raise c -ital for expansion through selling shares to the investing public.

The Bangladesh financial market is composed of two stock exchanges — Dhaka and Chattogram — and a non-instrumental segment of institutional investors such as commercial banks, investment banks, corporates, merchant banks, Insurance companies and other depositors.

Bangladesh, post liberation, somewhat lagged in the development of the financial market essentially due to rigid government regulations and uncertain market situations resulted from the devastation of the nine months long bloody war. We inherited a very small c -ital market consisting of 1,130 branches of 12 commercial banks, the Dhaka Stock Exchange, 10 insurance companies and the Samabaya (co-operative) Bank Ltd. Although the DSE remained inactive until 1976, it restarted functioning with nine listed companies having a meagre paid up c -ital of circa $1.6m. However, the creation of the Investment Corporation of Bangladesh in 1976 brought in the required impetus to accelerate the momentum of energising the stock market. It is an investment bank established to accelerate the pace of industrialisation and develop a vibrant c -ital market in Bangladesh. The Investment Corporation now underwrites public issue of shares and provides bridging loans to priority sectors. It also participates in direct purchase of shares, underwriting, purchase and sale of debentures and bonds.

The resurgence of c -ital market in Bangladesh was sluggish because of the exceedingly controlled supervision coupled with market limitations. Long-term funds required by industrial establishments were largely extended by government-owned development finance institutions at concessional and dictated interest rates. Development finance institutions mobilise their investible funds through government allocations, contribution from international financial institutions, and loans from the Bangladesh Bank.

During the 1970s, in the absence of a proper financial market, businesses had to borrow primarily form expensive banking channels and other informal sources at a very high interest rate. Also, individual investors were reluctant to invest their surplus funds in the growing but neonatal c -ital market. Development finance institutions were preferred sources of c -ital for people having proximity to power and to  -propriate public funds through intentional defaults in repayments. Given the nascent stage of the economy, they took full advantage of the almost non-existent recovery mechanism. There were no rigorous measures to recover defaulted loans or prevent them turning into bad debts.

Shares, mutual funds and debentures of companies are now traded on both the stock exchanges. The market c -italisation as of June 30, 2021 in the two stock exchanges is $107 billion.

The Securities and Exchange Commission, established in 1993, regulates overall activities of the c -ital market in Bangladesh. The objectives of the commission are to protect interests of investors, create an alternate funding channel, attract and develop the securities market, and ensure compliance of laws relating to proper issuance and trading of securities.

BANGLADESH has remarkably turned around from what was once called a ‘basket case’, registering an astronomical performance reflecting in the consistent GDP growth over a long period. It was reported earlier this month that the GDP per c -ita had increased by 9 per cent in last year, reaching an impressive $2,227. This performance is even more meaningful given that we are celebrating the 50th anniversary of our independence and centenary anniversary of our father of the nation Bangabandhu Sheikh Mujibur Rahman this year. Meanwhile, Pakistan’s per c -ita income is $1,543 and India’s merely $1,947. The latter which prides itself on being the only South Asian economy that matters now faces the reality that it, too, is poorer than Bangladesh in terms of per c -ita income.

Additionally, the Bangladeshi taka has been acknowledged as one of the stable and stronger currencies amongst the developing economies in Asia on the back of strong exports, uninterrupted remittance flow and a significant foreign exchange reserve. In August, S&P reaffirmed the sovereign ratings at BB- (long term) and B (short term) and expected Bangladesh to record a higher than average economic growth than its peers even in the face of critical short-term challenges.

Furthermore, the Economist magazine recognised Bangladesh as the ninth strongest economy amongst a list of 66 countries on the basis of four pertinent indicators of financial strength, with impressive performance like debt-to-GDP ratio of about 39 per cent, the external debt-to-GDP ratio of 17 per cent and annual debt servicing of less than 10 per cent. Given the foregoing, Bangladesh now has the financial clout of t -ping the international financial markets for large size foreign currency financial solutions. Bangladesh has ticked all the boxes to graduate to a developing nation in 2026 given its macro-economic performance.

Due to recent reverberations stemming from the Covid-19 pandemic, global markets have experienced the dual impact of large c -ital outflows and an increase in bond yields in developing markets. Concurrently, there has been a discernible surge in the issuance of corporate bonds by investment-grade companies, emerging economy governments, along with a flow in green bonds and sustainable bonds to fund their long-term requirements thereby increasing the number of the transactions in the c -ital markets.

Adversities caused by Covid-19 is said to have been successfully tackled by the government through large-sized stimulus package for all business sectors, timely steps of containing the virus by way of strict lockdown, a robust vaccination drive and increased healthcare facilities. The country in totality has exhibited incredible resilience in ensuring that collectively we have negated the storm and are on our way for an accelerated growth. We are on the right track for the next level.

It is indeed noteworthy to highlight the continuous development in all strata of public life particularly during the past decade as evidenced by the enormous growth in the gross domestic product given our distinctive potency and resilience. The world is observing our progress with keen interest as substantiated in identifying Bangladesh as one of the ‘break-out economies’ by Harvard Business review recently at the back of r -id digitisation, undergoing post-pandemic recovery as well as coordinated transformation towards the Sustainable Development Goals. Important stakeholders are acknowledging the country as a star performer amongst its peers.

Bangladesh must undertake further and stronger inroads in financial markets development given its ever-growing size which is expected to surpass $500 billion mark as well as efficiency enhancement to accelerate the next step of our development journey.

US stocks fall as traders assess the direction of monetary policy