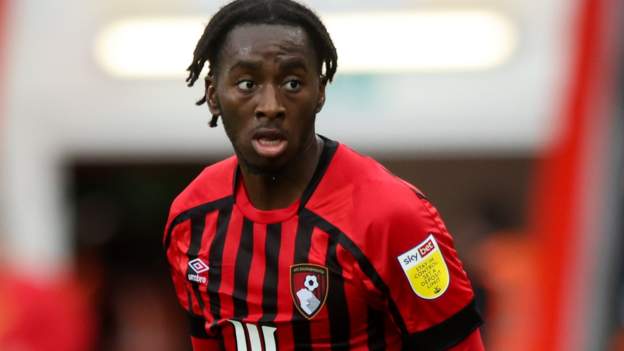 Jordan Zemura made his A debut for Bournemouth last September

Zimbabwean international Jordan Zemura has expressed his desire to become an integral part of the Warriors roster as the team returns to the World Cup qualifiers this month.

The 21-year-old Bournemouth full-back made his Zimbabwean debut in an Africa Cup of Nations qualifier against reigning African champions Algeria last November.

“I have to try to be the main character,” Zemura, who was born in London to Zimbabwean parents, told BBC Sport Africa.

“I don’t want to be selfish, but I want to help my country. I want to do everything I can in every single game.”

In preparation for the Africa Cup of Nations in January, Zimbabwe ends its disappointing World Cup qualification this week with games against South Africa and Ethiopia.

Zemura, who has played four times for the Warriors, was in good shape for Bournemouth in the championship, scoring three goals in 15 games.

He now hopes to be able to transfer this rich streak to the national team.

“I have to set an example for other players and say, ‘Listen, I’ve done well here and I want to show you that it’s only possible if you work hard,'” he said.

“‘Every game I’m out there [I have] the pride of playing for your nation, for your mother’s home. “I really have this exuberance, this energy to want to perform.”

Zimbabwe is no longer in Qatar for next year’s World Cup after a dismal qualifying campaign but Zemura believes the Warriors are on the right track despite the setback.

“We had some tough games against Ghana and Algeria, really strong teams, but I felt we took so much away in both games – we are on the right track,” said Zemura, adding that he hopes play in future tournaments for Zimbabwe.

“For me it’s about how many appearances I can make, how many tournaments I can make. I’m still waiting for my first goal. Hopefully I can do that in the next camp.”

Unless injured, the Cherries defender will continue to play for his country as Zimbabwe begins preparations for next year’s Africa Cup in Cameroon.

The Warriors were drawn in Group B along with Senegal, Guinea and Malawi for the tournament, which starts on January 9th.

Cop26: All the celebrities spotted in Glasgow for the climate summit