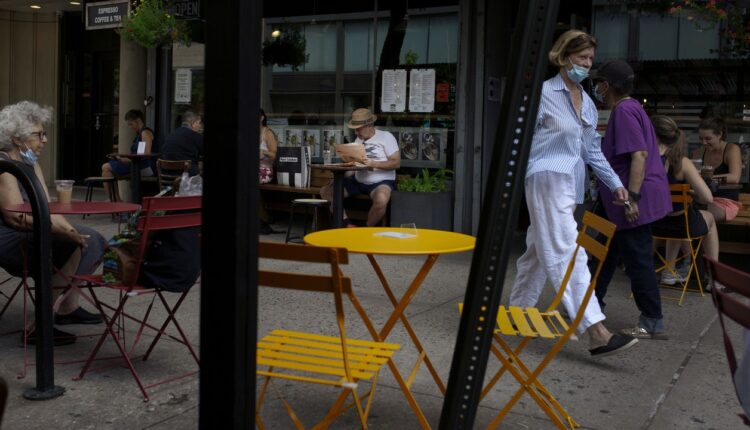 Let’s start with a bit of epidemiology. On July 12, the United States reported 35,383 new cases of COVID-19, according to the Times. A month later, as the Delta variant continued to spread across many parts of the country, the US reported 138,709 new cases. From an economic point of view, these data are important as the Department of Labor conducts its monthly survey of the recruitment of employers during the wage period, which includes the 12th of the month. COVID cases almost quadrupled between the July and August survey periods.

However, on Wall Street, most economists felt the big resurgence in case numbers would not have a big impact on attitudes, which had risen sharply since May when vaccinations became freely available and many COVID restrictions were lifted. Around this time last month, the Department of Labor reported that the economy had created nine hundred and forty-three thousand jobs in July. Earlier this week, the consensus estimate for the August figure to be released Friday morning was seven hundred and twenty thousand, according to the Dow Jones. The actual number was two hundred and thirty-five thousand – less than a third of the consensus forecast. Even taking into account sampling errors and other factors that make the monthly numbers fluctuate, this was a huge forecasting error, and it seems obvious that the Delta variant was to blame.

From February to July, total employment in the COVID-sensitive leisure and hospitality industry increased by approximately three hundred and fifty thousand per month. This attitude was discontinued in August: The industry has not created any jobs on the net. Although arts, entertainment (gambling) and recreational companies created 36,000 jobs, those gains were more than offset by the loss of 42,000 jobs in restaurants and bars. The most compelling explanation is that when the number of COVID cases skyrocketed, some people stopped going out and restaurant and bar owners reassessed their staffing needs. Such a theory is in line with OpenTable data for restaurant reservations, which has shown a sharp decline since July. Something similar appears to have happened in retail, where the latest spending numbers – for July – were also weaker than expected. The job report showed that retailers cut 29,000 jobs over the past month, with most of the decline focused in grocery and beverage stores.

The result of all of this is depressingly clear. Despite hopes earlier this year that mass vaccination would finally break the link between the pandemic and the economy, it hasn’t happened – at least not yet. According to the Department of Labor’s monthly household survey, which is part of the Employment Report, the number of people who said they were unable to work due to the closure or loss of their employers rose from 5.2 million in July to 5.6 million in August. Another sure sign that the Delta variant is biting: The labor force participation of women aged 20 and over, which fell sharply in the first few months of the pandemic before recovering somewhat, fell again last month.

The good news? “There aren’t any,” Ian Shepherdson, chief economist at Pantheon Macroeconomics, wrote in a newsletter to his customers over the weekend. “September is likely to be weak too, and we get nervous about the prospect of a decent revival in October as behavior lags cases and cases are still peaking.” This pessimism may prove legitimate, but it is not universal . “The August employment report was very reminiscent of April payrolls, when employment slowed sharply to recover within the next two months,” wrote Aneta Markowska and Thomas Simons, two economists at the Jefferies investment bank, in another analysis on Friday . “If anything, this is likely to be followed by an even faster / sharper recovery given the likely September labor influx.”

Two things we can say with certainty are that the average monthly salary for the three month period June through August is a solid 750,000, and the profit of two hundred and thirty-five thousand last month was far from trivial; in normal times it would be a healthy figure. Outside of the most virus-sensitive sectors, many employers are still hiring. Despite supply chain problems, the automotive industry created 24,000 jobs in August; Engineering and architecture firms added nineteen thousand; Information companies added seventeen thousand; the financial sector added sixteen thousand. In fact, the official unemployment rate fell to 5.2 percent last month, its lowest level since March last year. These are all comforting signs that the economy has not bottomed out and that the gradual recovery from the initial shock of the pandemic is continuing. In fact, the United States is one of the few countries whose GDP has already returned to pre-pandemic levels.

Looking to the future, a key question is how economic policy will react to the weakening labor market. In a speech last week, Federal Reserve chairman Jerome Powell hinted that the central bank was preparing to curb some of the monetary stimulus it has been providing since the pandemic began. Given the weaker August employment numbers, Powell and his colleagues will surely wait for the September report to be released early next month before making a final decision.

On the fiscal side, the White House and the Democrats on Capitol Hill are now facing renewed pressure to extend the unemployment benefit extension, which is due to expire this month. Washington Post’s Jeff Stein reported Friday that the Biden administration is divided on the issue, with some economic advisers worried that cutting additional benefits “poses a serious threat to millions of Americans who remain unemployed,” but the president does supports this in letting the additional services lapse.

The disappointing labor market report will certainly also play a role in the increasingly bitter debate among Democrats in Congress over two major spending bills: a bipartisan infrastructure bill and a larger Democratic bill to strengthen social security and promote green energy, that of Party Die Heads of State and Government hope to pass the budget reconciliation process. Earlier this week, Senator Joe Manchin outraged many Democrats when he advocated a “strategic break” in the Atonement Act. Shortly after the job report was published, Biden urged Congress “to finalize the adoption of my economic agenda so we can maintain the historic momentum we’ve built over the past seven months.”

It will be a few more weeks before we know the outcome of the spending wars and the Fed’s deliberations. But the slowdown in employment growth is strongly reminiscent of something Powell made clear a few weeks ago in remarks that now seem prescient: “The COVID pandemic is still casting a shadow over economic activity. There is still a lot with us. We can’t, you know, we can’t declare victory over it yet. “

More about the coronavirus