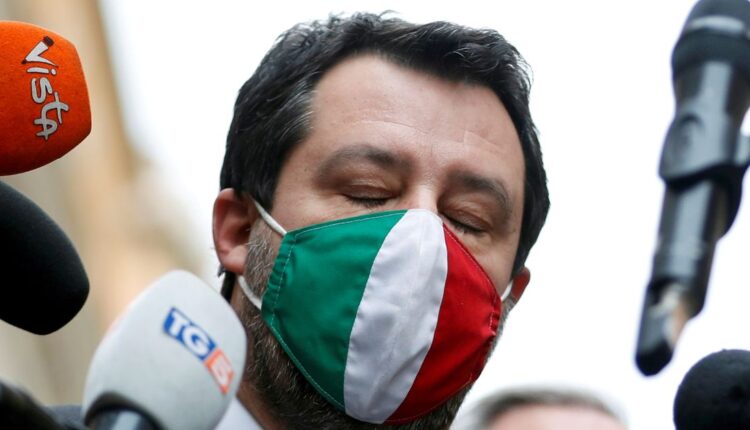 The leader of Italy’s far-right league party, Matteo Salvini, speaks to the media in Rome on January 28, 2021. REUTERS / Yara Nardi

ROME, Aug 27 (Reuters) – An Italian Secretary of State for Economic Affairs has resigned after causing an uproar when he said a park in his hometown should be renamed after the brother of fascist dictator Benito Mussolini.

Claudio Durigon, a member of the right-wing league, said earlier this month his party was determined to restore the park’s original name to Arnaldo Mussolini in Latina, a town of around 120,000 people in central Italy.

The park was renamed in 2017 to commemorate Giovanni Falcone and Paolo Borsellino, two leading anti-Mafia magistrates who were murdered by the Sicilian Mafia in 1992. Latina was founded in 1932 during fascist rule and is associated with Mussolini.

“This is our story that someone wanted to break off by changing the name of this park.

His remarks sparked a political backlash, with center-left parties within the broad unity government, which includes the League, saying they would table a parliamentary motion of censure against the Secretary of State if he does not resign.

With the controversy showing no sign of subsiding, Durigon resigned Thursday night, admitting he made a mistake and apologizing to the families of the Mafia victims.

“I am and never have been a fascist,” he said in a statement.

Salvini had originally tried to defend Durigon but came under pressure from supporters within his own group who were unhappy that one of their own politicians appeared to be praising Mussolini’s legacy.

The league competes with the extreme right-wing Brothers of Italy for the top spot in the opinion polls. Salvini thanked Durigon for his resignation and made it clear that he would stay in the league.