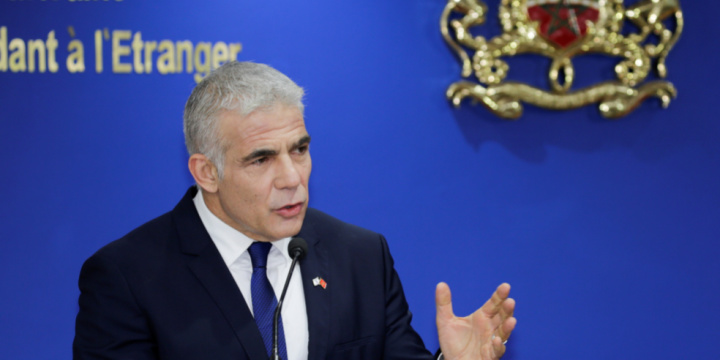 Israeli Foreign Minister Yair Lapid on Sunday presented a comprehensive draft for a change in Israeli policy towards the Gaza Strip, which is known as the “economy in exchange for security”.

According to the plan, Israel will first enable and support the reconstruction of the Gaza Strip’s infrastructure through massive foreign investment in exchange for a long-term guarantee of calm from the Hamas terror group, which ruled the strip.

In the second phase of the plan, Israel will support major projects such as the construction of a new Gaza seaport and a transport link to the West Bank.

Israeli news site N12 reported that Lapid announced the proposal at the annual International Conference of the Institute for Counter-Terrorism at Reichmann University, stating that the early stages of the plan would focus solely on humanitarian aid, along with “Peace of Mind.” for calm ”- presumably that means an end to the Hamas rocket attacks and other terrorist activities on the southern border of Israel. Any terror by Hamas, he added, would freeze the process.

However, Lapid stated: “We are ready to give more than in the past.”

In the first phase there will be a comprehensive rebuilding of the electricity, gas, housing, transportation, health and water infrastructure of the Strip. There will also be a mechanism to prevent Hamas from diverting funds and materials for terrorist purposes.

The second phase depends on the success of the first phase and includes “economy in exchange for security”, according to which – as long as Hamas meets certain conditions – projects such as an artificial island off the coast of Gaza, the construction of a seaport, a transport link to the West Bank, international investment in the Strip and economic cooperation with Israel, Egypt and the Palestinian Authority.

The main investors in these second phase projects include the European Union, the United States and the World Bank, and the participation of the Gulf States under the leadership of the UAE.

Lapid said he has had “many preparatory discussions with parties in the Arab world and the Western world who are examining the idea.” These include Egypt, the Gulf States, US Secretary of State Antony Blinken, Russian Foreign Minister Sergei Lavrov and the EU.

The initiative was formulated, said Lapid, because “the previous policy of Israel has not fundamentally changed the situation. … We have to change direction. “

“The international community and the people of Gaza need to know that terrorism is the obstacle between them and normal life,” he said.

Two ways to play the 107% rally on natural gas