It was revealed this morning that we’re down to the last two in the WTO director-general race: Nigeria’s Ngozi Okonjo-Iweala and South Korea’s Yoo Myung-hee. Given the Chinese and Japanese reservations about the latter, we’d say Okonjo-Iweala is a clear favourite. Not a great shock that Britain’s Liam Fox and Saudi Arabia’s Mohammad al-Tuwaijri went out (we’re devastated we never got interviews with either, truly we are) but it’s surprising, at least given the starting positions in July, that Kenya’s Amina Mohamed didn’t make it. From the sounds of it her past career in trade, particularly chairing the fractious WTO ministerial meeting in Nairobi in 2015, might have made her too many enemies. It’s unfortunate if getting stuff done — the ministerial meeting ended up with a declaration on farm export subsidies, a rare success in WTO talks — makes you unpopular, but there you have it. Instead, we seem likely to end up with a widely admired policymaker but with very little direct WTO experience.

In other personnel news, Valdis Dombrovskis was overwhelmingly approved by the European Parliament as the EU’s new trade commissioner to replace Big Phil Hogan. He reacted with what by the Latvian’s phlegmatic standards was an ecstatic celebration. We’ll hear more from him soon, we’re sure. Today’s main piece is about a provocative move at the WTO over intellectual property rights for Covid-19 vaccines and other treatments, while Tall Tales is about USTR Robert Lighthizer’s attempts to spin horrendous news as a victory. Our chart of the day looks at EU imports of face masks.

The IP replacement operation to treat the pandemic

It’s been a while since intellectual property rights in a public health crisis became a big trade issue. Antiretroviral (ARV) drugs in the HIV-Aids pandemic in the 1990s and 2000s was probably the last. But it looks like we might be heading there again now.

Last week India and South Africa, continuing their role as the WTO awkward squad, filed a request for a waiver of the multilateral Trade-Related Aspects of Intellectual Property Rights agreement. It would allow countries to override IP for essentially any medical product related to preventing, containing or treating Covid-19.

The request is extraordinarily and unprecedentedly broad. It would allow countries to change their domestic IP law to ignore not just patents but also copyright, trade secrets (not Trade Secrets, please don’t ignore us), clinical testing data and so forth without facing consequences at the WTO. Given that Covid-19 can attack multiple organs and has many risk factors, this would go well beyond the obvious issue of vaccines and allow a manufacturing free-for-all across a huge swath of medical products.

It won’t get through in this form: lobbying from the US pharmaceutical industry will see to that. Still, the rich countries’ current strategy to develop a vaccine — a patchwork of public-private projects in association with pharma companies with rather fractured attempts at co-ordination — is looking a bit of a mess. If it fails to achieve widespread and equitable treatment, and more generally if there are renewed shortages of Covid-related medical products, the South African/Indian approach could well prove a catalyst for doing something different.

As it happens, the WTO is highly likely to acquire a DG — Okonjo-Iweala — who wants to make the public-private approach work. She told us in an interview in July: “We’re saying we need to get these vaccines to everyone at affordable prices (but) how do we protect intellectual property, because without that you will not have the innovation, and the research?” Conversations between Okonjo-Iweala and India/South Africa might get a bit spicy.

The arguments against Trips waivers like this are well known. Countries can already issue compulsory licences to override patents if production is mainly for domestic use, and broader exceptions exist for the least developed countries.

Moreover, specifically in the case of a vaccine, they may also be missing the point. “IP is not the gating factor in the short-to-medium term on vaccines,” says Thomas Bollyky, director of global health at the Council on Foreign Relations think-tank. He says it is not analogous to HIV-Aids ARVs, which are standalone medications relatively easy for generic pharmaceuticals companies to copy. A Covid-19 vaccine, one of a class of so-called “biologic” treatments produced from living organisms, requires a bunch of supporting technologies to make.

The South African/Indian proposal says it addresses that problem by covering a range of IP protections, not just patents on molecules. But Bollyky says expertise in the complex manufacture of vaccines nonetheless takes years to develop.

Critics also question the proponents’ motives. India has a huge low-cost pharmaceutical industry including the Serum Institute, one of only a handful of producers worldwide capable of making Covid-19 vaccines on a massive scale.

So is this proposal just a self-interested distraction? Not quite. IP may not be the main constraint for vaccines, but it is very important for a lot of products. And while compulsory licensing is certainly an option, it requires governments to jump through various hoops including first negotiating with manufacturers to deliver the product at a low price, the idea being to tweak the patent-protected business model rather than overriding it.

However, we’re in a world where normal ownership rights are being overturned, including in rich countries, and of physical property, not just IP. It’s not just about Italian producers’ 3D-printing parts for ventilators first and worrying about royalties later, or American companies being pushed to release patents for respirators, or the EU admitting it might abandon its promise not to import pharmaceuticals produced under compulsory licence abroad. It’s also a world in which property rights more broadly are being trampled on, with France expropriating face masks from fellow EU countries.

You can easily imagine developing countries wearying of doing things by the book and having to rely on imports from rich-world companies. The South African/Indian approach is instead to increase supply all over the world by drastic means. Excessive? In this very broad form, yes. But its proposers aren’t naive: they know very well it’s an opening gambit, not a likely final outcome. If we see repeats, even in slower motion, of the scramble for protective gear in the early months of the pandemic on a broader scale, the pressure to suspend IP protection will only increase.

While the pandemic has, in general, negatively affected trade in goods, it has increased demand for certain things, notably face masks. Eurostat, the statistics arm of the European Commission, noted this week that the value of EU imports of face masks grew dramatically in the first semester of 2020 compared with the same period in 2019, from €800m to €14bn; an increase of 1,800 per cent. While member states with a large population predictably imported more face masks than those with a small population, there were notable differences among members states on a per capita basis. 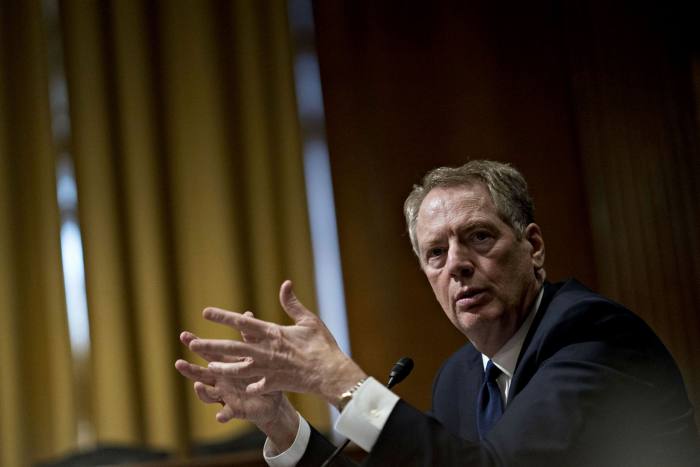 It’s not often you feel sorry for Bob Lighthizer, but we’re going to give it a go. Unusually, the USTR was moved to public comment on this week’s international trade data, the last before the presidential election. The figures showed the goods and services deficit continuing to shoot higher, rising nearly 6 per cent in August to the highest in 14 years. It wasn’t fair to judge his trade policy on this, Lighthizer said: the goods deficit would have been a lot smaller this year but for US demand recovering relatively quickly from the pandemic, boosting purchases from abroad, and a spike in non-monetary gold imports reflecting risk-hedging strategies. It’s quite an epitaph: HERE LIES ROBERT LIGHTHIZER. HIS STRATEGY WOULD TOTALLY HAVE WORKED OVER A CHERRY-PICKED TIME PERIOD EXCEPT FOR THOSE MEDDLING GOLD TRADERS AND THEIR IRKSOME RISK-HEDGING STRATEGIES.

As it happens, he seems to be right on those two limited points. But on the wider issue, the idea that deficits are driven by trade and specifically tariff policy rather than relative savings rates and other macro factors is one that few serious economists believe. Lighthizer has had four years to show that you can bring a deficit down with aggressive mercantilist trade policy. It hasn’t worked. It’s a tall tale that has met reality and come off very much the worse.