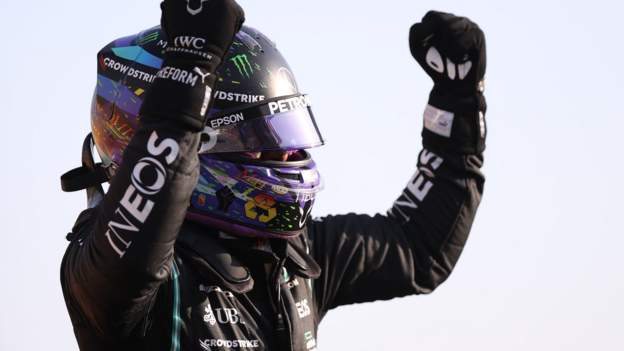 The crowds are back at the British Grand Prix – live on BBC Radio 5 Live, with digital coverage on the BBC Sports website

Lewis Hamilton thrilled the pole position for the new sprint race on Saturday at the Grand Prix of Great Britain in front of 86,000 spectators at Silverstone.

Valtteri Bottas from Mercedes was third ahead of Charles Leclerc from Ferrari.

Hamilton set the time that mattered on his first lap in final qualifying. He was on course for a faster time on his last run but made a mistake, slipped far on the penultimate corner, Vale, and lost time.

But while Verstappen improved on his last lap, it wasn’t enough to oust Hamilton and the seven-time world champion made the crowd rave.

This is already the largest crowd at any sporting event in the UK since the pandemic began – and more to come over the weekend, with 140,000 attending the Grand Prix on Sunday at temperatures forecast of almost 30C.

It was a vintage Hamilton performance backed by the Mercedes team’s first upgrades since the Spanish Grand Prix in May, but it’s not another pole position for its 100 list – officially the driver will, who wins the sprint on Saturday is considered the pole position winner.

And it was an important change of form after four wins in five races by Verstappen, which resulted in a 32-point championship lead.

The crowd sang Hamilton’s name as he conducted his post-session interview, and he basked in their admiration.

Hamilton said, “We’ve been missing all of the years, I’ve lost my voice a little. I’m so grateful to see everyone here. Coming to Silverstone and having a full crowd like this. You can feel the energy. I was I.” hopeful with the great work we did on the team and the energy of the fans would bring us here, that’s because of the fans.

“The first lap was great and the second looked even better, but I just lost the back end on the last corner and my heart was in my mouth as I crossed the finish line.”

20 Detroit celebrities you can get a shoutout from on Cameo