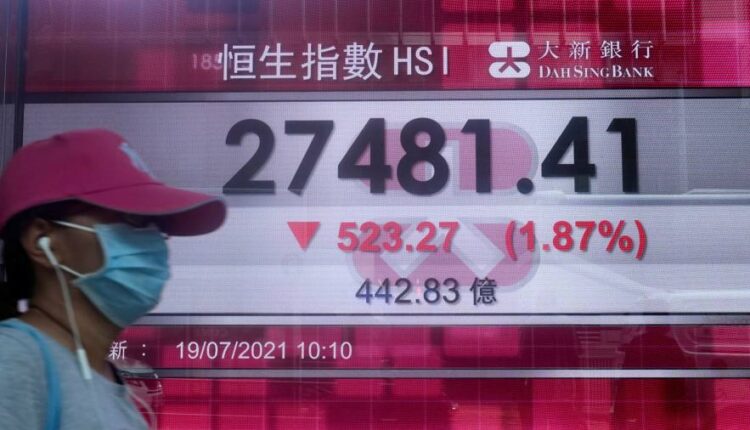 The most recent stumble for stocks came as investors grappled with the rapid spread of the highly transmissible Delta variant of Covid-19, which has hit countries that had previously controlled the virus.

Futures markets posted further losses for US-listed stocks, which ended Friday with their worst weekly performance in more than a month. S&P 500 futures were down 0.4 percent while those for the London-based FTSE 100 fell 0.8 percent.

The falls coincide with Covid-19 outbreaks related to the Delta variant. New York state recorded more than 1,000 cases in a day for the first time since mid-May on Saturday, while authorities in countries like Australia and Vietnam struggled with rising infections.

Vietnamese authorities on Monday issued a home stay order in the capital Hanoi and a two-week lockdown in southern regions to contain a record jump in cases that caused the Ho Chi Minh stock index to fall as much as 2.4 percent.

Michael Hood, global multi-asset strategist at JPMorgan Asset Management, said the rapid spread of the delta variant “is forcing investors to focus on the virus again at a time when most would have liked to leave this problem behind” .

“Markets are also grappling with unobserved inflationary pressures, with uncertainty as to whether it will be temporary or permanent,” added Hood.

In commodities, oil prices fell after OPEC and its allies reached an agreement to increase oil production to counter rising prices and announced a plan to reverse all production cuts made during the pandemic by the end of 2022.

Brent crude, the international benchmark, fell 1.6 percent to $ 72.44 a barrel in Asian trading, while US West Texas Intermediate crude fell 1.5 percent to $ 70.74.

Brent had risen to a three-year high of more than $ 74 a barrel as demand recovered this year, and it was uncertain whether the cuts on Opec + will be enough to offset upward pressure on prices as demand comes in the coming Months is expected to increase further.

On currencies, the pound sterling fell 0.2 percent to $ 1.3748 after Prime Minister Boris Johnson and two other senior cabinet ministers confirmed they would self-isolate on so-called England Freedom Day on Monday, as the country has its remaining Lifts pandemic restrictions.

As the stimulus funds dwindle, the US economy will slow down