Hello from Brussels. We’re almost halfway through the hearings and press conferences in the selection process for the World Trade Organization’s director-general, and we’ve heard a bit of personal spice but nothing that looks like a game changer. Full rundown on Monday. The focus of attention in Brussels is two big rulings by EU judges. Yesterday they sided with Apple against the European Commission over the taxes the company pays in Ireland. Today they struck down Privacy Shield, the EU-US data-sharing deal. Both have implications for trade. The first will intensify the debate about taxing tech giants, which is already threatening to kick off more transatlantic conflict. The other will complicate the issue of strong provisions to guarantee data flow in trade agreements, which the EU says endanger its privacy regime.

Today’s main piece is about how the US’s existing trade war against Europe is undercutting its campaign to push Huawei out of 5G around the world. Tall Tales focuses on a truly surreal intervention by Donald Trump, while our chart of the day looks at the rebound in steel prices thanks to China’s recovery.

Five Eyes, how come you chose to fail?

(It’s from a song.) We’re getting used to unacknowledged U-turns on trade from Boris Johnson’s UK government in recent months (border checks on goods between Great Britain and Northern Ireland, chemical-washed chicken on the table in US bilateral trade talks, etc). So it’s refreshing that Britain this week did an open and transparent about-face on letting Huawei into 5G.

Its rationale — that the US sanctions on chips meant it couldn’t assess Huawei’s safety any more — sounded a bit feeble. It seems likely diplomatic pressure, some would say bullying, from the Trump administration played a big role. But that heavy-handed effort has been much less effective — probably counterproductive — in the EU, which the US really wants on board to build a critical mass of Not-Huawei countries. After all, it’s hard to persuade governments to throw in their lot with you when you’re conducting a trade war against them.

Pushing out Huawei doesn’t come cheap: the main non-Huawei options, Ericsson and Nokia, are more expensive, at least in the west. Earlier this week we ran a story about the UK’s attempts to turn the Five Eyes security alliance (Australia, Canada, New Zealand, the UK and the US) — and possibly the “D10” group of democracies — into a broader industrial and trade operation. In the UK’s vision (which, as we pointed out, looks a lot like a junior version of the US’s established approach) Five Eyes/D10 would create non-Huawei options via procurement choices and support for research and development in technologies such as OpenRAN.

There are a few problems here. One is that OpenRAN would also undermine the market position of Huawei’s competitors. Ericsson, which has a foothold in the vast Chinese 5G market, has no intention of joining in an Anglo-American campaign to politicise and bifurcate the tech sector to its own detriment.

Recently, it politely declined to join the recently launched “OpenRAN Policy Coalition”, a group of non-Chinese companies formed to develop the technology. Ericsson told us: “We believe in open and fair competition. To stay ahead in the 5G race, the US and other governments should maintain their market-based approaches through technology-agnostic policies.”

An Ericsson factory in Estonia. The company has a foothold in the vast Chinese 5G market © Bloomberg

A more fundamental issue is this. Five Eyes countries themselves have been moving against Huawei, yes. Australia has banned it from 5G, New Zealand has set a security bar so high that Huawei so far hasn’t cleared it. But Five Eyes is basically a spy ring. It would be a huge shift collectively to do R&D, let alone infrastructure, on a big scale. GCHQ might be just the people to eavesdrop on Russian undercover agents operating in the UK, but they’re not really your go-to guys to put up cell towers.

So the US and its allies need reasons to get EU countries to swallow the extra cost. Washington has had some success in Nato-oriented central and eastern Europe, and partially in France. Italy seems to be shifting as well. But Germany, the big prize, has resisted. Berlin traditionally has good relations with China (gotta keep those machine tool exports going), but recently not so much with the US.

Washington does have allies in Germany. Norbert Röttgen, a leading parliamentarian from Angela Merkel’s Christian Democrats, has drafted a bill to exclude “untrustworthy” companies from German 5G. But he reasonably enough points out you can’t really trust a country that puts tariffs on European aluminium and steel and threatens them on cars. Earlier this year, during a visit to Washington, Mr Röttgen wrote on Twitter: “The #USA & EU could team up to counter #China’s #5G dominance . . . But to do so we must know that tariffs against Brussels are off the table. Partners don’t threaten one another.”

Given that, as we wrote on Monday, US Democratic challenger Joe Biden’s supply chains strategy involves encircling China with allies, making a big shift here would be an absolute no-brainer. With no Robert Lighthizer to whisper in his ear about lobsters, Biden could end the trade war against Europe and try to recruit EU countries into an alliance based on common interest rather than diplomatic bullying.

In the short term, that’s probably going to produce better results than the UK’s grand plans for turning Five Eyes or D10 into a new Manhattan Project. We’ve heard a lot about the interplay of trade and security in recent years: we’re going to hear a lot more. Huawei and 5G is going to be one of the biggest cases to watch.

Iron ore has outpaced gold to rank as the best-performing major commodity this year, as a rebounding China sucks in vast amounts of the key steelmaking ingredient from mines in Australia and Brazil, writes Neil Hume. Signs that China, the world’s biggest producer of steel, is mounting a solid recovery have propelled iron ore prices up 9 per cent over the past month. 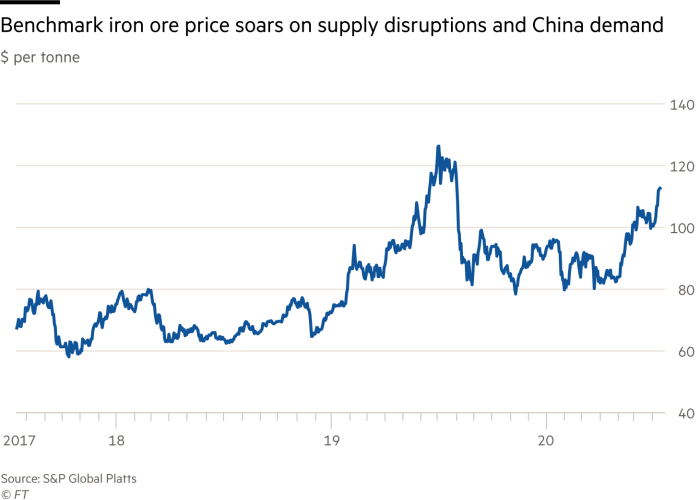 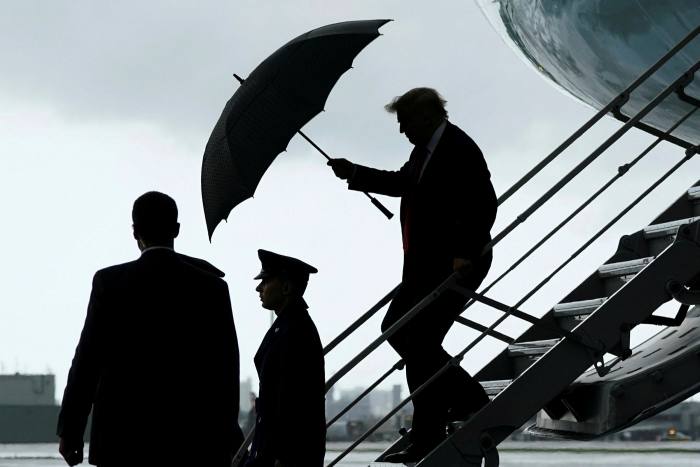 This isn’t so much a tall tale as an intervention from an alternative reality where words mean something entirely different, but here goes. Donald Trump on Tuesday said: “(Joe) Biden personally led the effort to give China permanent most-favoured-nation status, which is a tremendous advantage for a country to have. Few countries have it. But the United States doesn’t have it, never did, probably never even asked for it because they didn’t know what they were doing.”

OK, so ignoring the “Biden personally led” nonsense, it’s true China had temporary renewable MFN status for a while before it became permanent when it joined the WTO in 2001 during George W Bush’s presidency. But the idea that the US doesn’t have the same MFN privileges in the WTO is off the wall. Perhaps, as the baffled Twitter peanut gallery wondered, Trump was complaining that the US hadn’t given MFN treatment to the US, in which case there is only one solution, for the US to put tariffs on itself. Here at Trade Secrets we scoff at such namby-pamby half measures. Not till Trump directs the full range of trade sanctions at the US and cuts himself personally off from the dollar payments system will this terrible, terrible MFN iniquity be addressed.