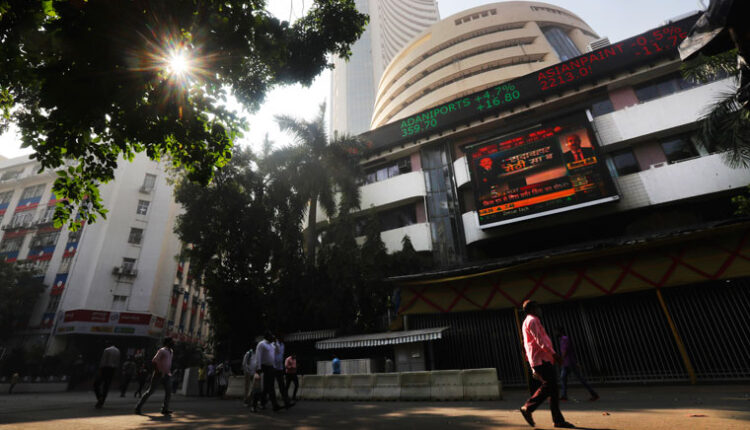 After the markets hit record highs, there have been some corrections in the last few sessions; the BSE Sensex closed below the 59,500 level this week. What are the prospects? Where are the interest rates going? Which sectors look good from a growth and valuation perspective? Sampath Reddy, Chief Investment Officer at Bajaj Allianz Life Insurance, shares his thoughts with THE WEEK.

Equity markets rallied strongly through 2021 despite valuation warnings. Do you think there’s even more steam left after what we’ve seen in the past few days?

Yes, the valuations are pretty high with the sharp market rally. Corporate earnings were a pretty positive surprise amid the pandemic, however. In FY21, we saw Indian GDP decline 7.3 percent, but Nifty EPS (earnings per share) rose a healthy 18 percent, from earlier expectations of a drop in earnings growth of about 10 percent. Despite the second wave, earnings were not significantly downgraded for FY22 and FY23 and are expected to increase by 25 percent and 20 percent, respectively. Hence, this upward trend in corporate profitability cycles, supported by corporate cost-cutting initiatives, has contributed to the positive market sentiment and rally, alongside the global liquidity surge that has hit capital markets. The economic recovery also went better than expected and the Christmas season could further boost growth and consumption.

In the short term, we could experience some market volatility due to the Fed tapering or rising inflation and commodity prices. However, we believe a market correction may not be as deep as March 2020. India’s long-term growth story remains intact, with India remaining a preferred investment choice among comparable emerging markets.

What impact will the Federal Reserve and other central banks’ liquidity throttles have on stocks in emerging markets, including India?

The market expects the Fed taper to be announced in November 2021, but is expected to be gradual and calibrated. It’s not that the Fed is stopping quantitative easing abruptly and withdrawing liquidity. In addition, interest rate hikes are not expected until the end of 2022 and the FOMC forecast of the September meeting points to a rate hike of 20 basis points in the 2022 calendar.

However, with markets moving expectantly, we could see some volatility in emerging markets (including India) in the short term once the Fed begins to tighten. However, as noted earlier, India appears to be well positioned among emerging markets from a long-term fundamental perspective.

Also, some of the macroeconomic indicators in India are better positioned than they were during the Fed’s taper rage in 2013. For example, the current account deficit for FY23 is projected at 1.5 percent of GDP, versus a high current account deficit of 4.8 percent of GDP in FY13. Foreign exchange reserves are currently at a record high of more than $ 600 billion (indicating import coverage of 13-15 months) versus reserves of around $ 300 billion in 2013 (when import coverage was around six months). Inflation is also currently much more moderate than the high inflation rates of 9-10 percent in 2013.

In the most recent meetings of the Monetary Policy Committee, the RBI also began to slowly absorb excess liquidity. Are repo or reverse repo rate hikes coming?

Yes, the RBI has indicated a liquidity normalization for the future as the economic recovery continues.

We assume that in its monetary policy review in December or early 2022, the RBI could begin to reduce the corridor between the repo and reverse repo rate (by increasing the reverse repo rate) in order to intervene efficiently in order to keep the yield curve to control. An increase in the repo rate is expected in 2022, depending on the inflation and growth curve and the monetary policy of the major global central banks.

What is the outlook for interest rates and stock markets in 2022?

We believe interest rates have bottomed out and expect yields to be a bit tougher in the future. As mentioned earlier, the RBI will try to intervene (via open market operations) and prevent long-term returns from hardening too much as it will have to effectively manage the remaining part of the large market lending program. We currently prefer the medium-term part of the yield curve.

As for equity markets, we believe that earnings growth momentum will be sustained and broad-based in FY22 and FY23, which should support sentiment and market valuations to some extent. So India’s long-term growth story remains intact and gaining traction, and we therefore recommend that investors continue to invest systematically in stocks. There may be some market volatility in the short term, but given the good earnings outlook, we don’t expect a very deep correction. From a market capitalization perspective, we currently prefer the large-cap segment over the mid / small-cap segment, with the valuation premium for the latter widening due to the strong rally this year.

Given that the markets have hit records, what are the risks, if any, from now on, other than, of course, the reduction in easy money?

Besides the reduction, rising commodity prices (especially crude oil prices) are one of the other risks, which is cause for concern for a net oil importing country like India; although, as noted, our current account deficit is still benign compared to FY13 highs. Globally, inflation has risen quite sharply and domestic inflation could also recover, although it has weakened in recent months due to falling food prices. Core inflation in India is still slightly higher. Rising interest rates are also not very beneficial for the stock markets, although interest rates are still a long way from previous highs. Geopolitical issues also need to be kept in mind.

From an industry perspective, what would you put your money on now?

We have a positive view of selected banks, metals and the infrastructure and capital goods sectors.

As the economy recovers, we expect credit growth to pick up gradually after shrinking around five to six percent for a while. Large private sector banks would lead credit growth in the economic recovery, coupled with the hypothesis that borrowing costs would normalize in the second half of the year. The banking and financial sector has around 40 percent weight in the Nifty Index and accounts for 25 percent of total revenues. Healthy after-tax earnings growth of 25-30 percent is expected for the sector in FY22 & 23. Valuations also remain reasonable for the sector.

The metals sector has benefited from a sharp rise in metal prices, which has helped increase profitability. In addition, metals companies were able to take advantage of this rise in earnings to deleverage their balance sheets, which previously worried the sector.

As the economy recovers, we also expect the investment cycle to recover gradually, led initially by public infrastructure spending. We also expect the government’s PLI program to give a boost to domestic manufacturing. The contribution of the manufacturing sector to GDP for India has weakened in the last few years, this could help to revitalize the manufacturing sector. The government has also announced a national monetization pipeline of Rs 6 trillion over four years (FY22 to FY25) for leasing central government assets. It is expected that the additional income from this will mainly be used for infrastructure expenditure.

The IPO market has been hot this year, be it in terms of number of issues or funds raised, and several issues have had record highs. What’s your outlook? In your opinion, is there still enough appetite for mega IPOs like LIC and BPCL?

Yes, given the market momentum, equity issuance has been strong this year and we have seen some large IPOs with strong gains over the past few months. This suggests a healthy appetite from investors (both retail and institutional). The IPO pipeline remains quite strong in FY22 with net equity supply expected to reach record highs.

Gold prices are rising now, but with mixed expectations