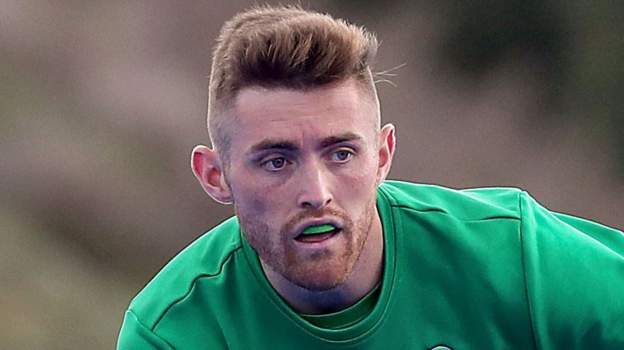 Shane O’Donoghue has increased his international goals to 115

Ireland are in third place at the Eurohockey Championship II after beating hosts Poland 4-2.

After a strong performance, Kevin O’Dea and Jonny McKee gave Ireland two goals ahead at halftime.

Wojciech Rutkowski and Jacek Kurowski scored corners on both sides of Shane O’Donoghue’s goal, making for an exciting final.

As with the semi-final defeat against Scotland, Ireland started with the better team. O’Donogue’s weak attempt was well held up by Maciej Pacanowski and Ireland’s top scorer was again involved when he shot a shot just wide of the post.

Kevin O’Dea opened the goal when he crocheted the ball into the danger area after 10 minutes after a powerful throw from Peter McKibbin.

Poland rarely threatened Jakub Chumenczuk and Robert Pawlak’s bar endeavors in the first quarter, who missed a golden chance at close range, and Ireland continued to punish this when McKee converted to the perfect end of the first quarter after a fine solo run.

Ireland clinched nearly a third before the break when McKee came back from a shot from the crossbar, but while Mark Tumilty’s men didn’t score as many chances in the second quarter, with a controlled display they were good value for money their leadership.

Poland shot back a goal five minutes after the break with a great finish from the penalty corner from forward Rutkowski, which was almost immediately undone by O’Donoghue’s shot from a penalty corner.

But the host nation, supported by a noisy crowd, fought their way back shortly before the end of the third quarter when captain Kurowski’s penalty corner went 3-2 through Irish goalkeeper James Milliken.

Daragh Walsh shot wide as Ireland pushed on goal to end the game and Pacanowski parried well to keep O’Donoghue from scoring his second penalty corner of the game.

The winning goal came three minutes before the end of the game, however, when Pacanowski defeated Iain Stewart from close range, but O’Dea was there to catch the rebound and crown the win.