The crypto market is currently going through a period of heightened volatility as global economic conditions continue to deteriorate amid rising inflation and interest rates.

As the headwinds impacting global financial markets wipe out all traces of bullish sentiment, many crypto investors are predicting that Bitcoin (BTC) price could fall as low as $10,000 before finding a market bottom.

While many traders scoffed at the idea that BTC could fall below its all-time high set in 2017, the recent drop to $17,600 suggests this bear market could be different than the last one.

Here’s what multiple analysts are saying about the possibility of Bitcoin falling to $10,000 in the next few weeks.

According to a recent report from Arcane Research, the current drawdown has lasted for 229 days and has so far reached a maximum drawdown of 73%.

“If Bitcoin follows the blueprint of these cycles, a bottom should be reached sometime late in Q4 2022, with the price as low as $10,350.”

While there is always a possibility that an 85% pullback is possible, Arcane Research also noted that “Bitcoin is now much more intertwined with the broader financial markets, with the Fed, US elections, crypto regulations and the stock market impacting its performance influence”.

Further evidence supporting the possibility of a drop to the $10,000 range was raised by cryptocurrency research firm Delphi Digital, which published the chart below, noting that “from a high time frame market structure perspective, the next place we have to see, $10 is K–$12,000.”

Based on the chart above, market structure support is likely to stand between $9,500 and $13,500 on the high timeframe.

“Coincidentally, this area coincides with the implied low when BTC experiences an 85% drop from peak to bottom.”

Not every analyst expects a drop to $10,000. Take Will Clemente from Blockware Solutions for example. According to Clemente, Bitcoin’s current range reflects a good point for accumulation.

It has traded just 3% of its entire existence so far below its 200-day trend and aggregate cost basis. pic.twitter.com/kW6BysdkQ0

“Only 13 out of 4,360 trading days (0.2%) have there ever been similar circumstances, occurring in only two previous events, January 2015 and March 2020. These points are marked green on the chart.”

Based on the delta price metric, which remains untouched, the potential bottom for BTC is $15,750.

Related: Bitcoin’s near-term price outlook has improved slightly, but most traders are far from optimistic 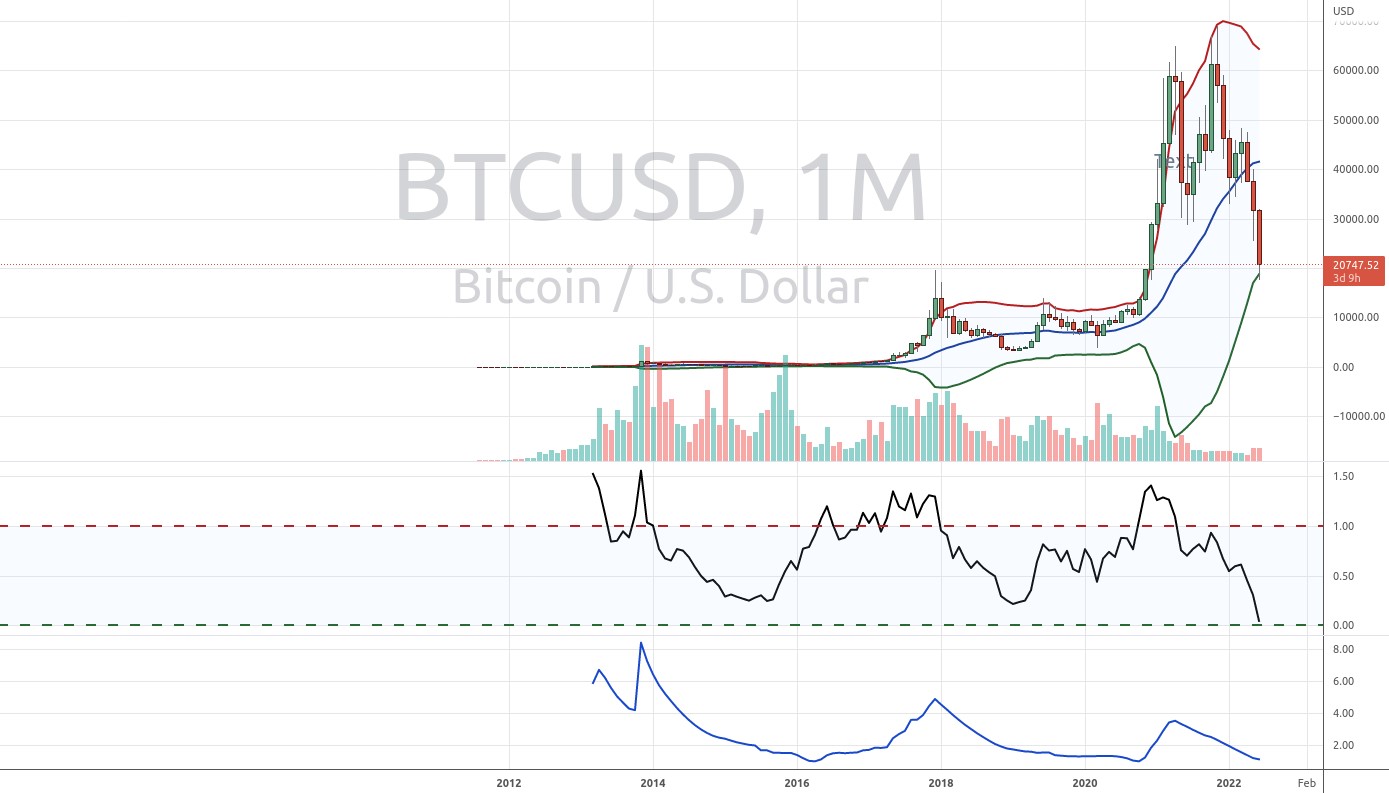 John Bollinger, the creator of the popular trading indicator Bollinger Bands, also suggested that the Bitcoin price may have bottomed.

“A perfect double top (M-type) in BTCUSD on the monthly chart, complete with confirmation by BandWidth and %b, results in a lower Bollinger Band day. No sign of it yet, but this would be a logical place to bottom out.”

The views and opinions expressed herein are solely those of the author and do not necessarily reflect the views of Cointelegraph.com. Every investment and trading move involves risk, you should do your own research when making a decision.

Ebtikar for Investment Finance postpones IPO due to market conditions

27 blockchain and cryptocurrency articles from Nicholas…