Bitcoin price could surge to $35,000 but analysts say they don’t expect a “V-shaped recovery.”

Altcoins saw a rebound on May 13 as the initial panic sparked by Bitcoin’s sell-off, Terra’s UST collapse and several stablecoins losing their dollar pegs begin to decline, with risk-on traders looking to grab assets up annual lows are traded.

Despite last week’s significant correction, bitcoin (BTC) bulls have managed to push back into the $30,000 zone, a level that has been defended multiple times during the 2021 bull market.

Here’s a look at what several analysts have to say about the outlook for Bitcoin as the price attempts to recover in the face of multiple headwinds.

Is a short squeeze coming up?

A glimpse into the minds of derivatives traders was provided by cryptocurrency analytics platform Coinalyze, which rated Bitcoin long versus short positions for BTC/USD perpetual contracts on ByBit.

As shown in the lower half of the chart above, interest in shorts, shown in red, has spiked during the recent market downturn, suggesting that derivatives traders were anticipating more downside in the short-term.

“Sentiment has been very negative over the past few days as shown by the ByBit long/short ratio and funding rate. A short squeeze/bounce is expected,” Coinalyze founder Gabriel Dodan told Cointelegraph in private comments.

Bitcoin’s drop to $26,716 on May 12 was notable in that it fell below the May 2021 low of $28,600, “which was viewed as the last man standing for BTC,” according to David Lifchitz, managing partner and Chief Investment Officer at ExoAlpha.

According to Lifchitz, the May 13 bounce was to be expected as “a lot of bad news has been washed out” while the “panic movement from the UST fiasco has already taken place”.

Bitcoin, sitting on the May 2021 lows, “looks like a good entry point here with a tight stop if the purge continues,” Lifchitz said, but traders should not expect an overnight return to $60,000 to materialize , and should instead set a more modest short-term target of $35,000.

Related: Buy the dip or wait for maximum pain? Analysts debate whether bitcoin price has bottomed

A V-shaped recovery is unlikely

Market analyst and pseudonymous Twitter user “Rekt Capital” provided insight into what Bitcoin would need to regain its bullish momentum, who posted the chart below noting that BTC “needs to hold $28,600 as support for the price to challenge $32,000”. while a “weekly close below the green would be bearish”. 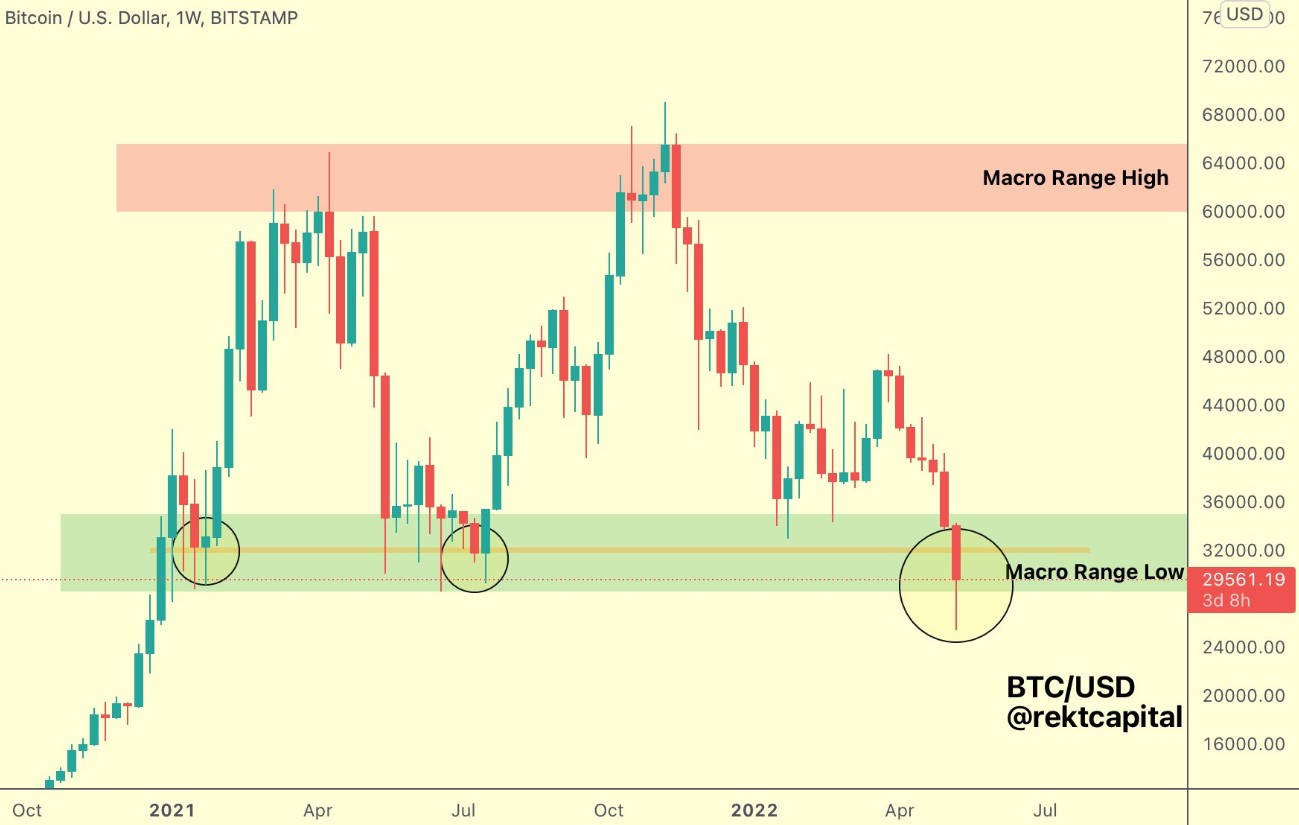 While many optimistic traders are hoping for a speedy recovery from this recent downturn, Rekt Capital warned that “by historical standards, a sharp V-shaped recovery that marks a generational bottom is less likely.”

“Many are expecting one as the bottom of the BTC bear market in March 2020 was very volatile. But macro price action suggests extended ranges are more likely.”

The total cryptocurrency market cap is now $1.287 trillion and Bitcoin’s dominance rate is 44.4%.

The views and opinions expressed herein are solely those of the author and do not necessarily reflect the views of Cointelegraph.com. Every investment and trading move involves risk, you should do your own research when making a decision.

According to Quant Analyst, Crypto Insiders have Sent…

Algorithmic stablecoins and how do they differ from other…