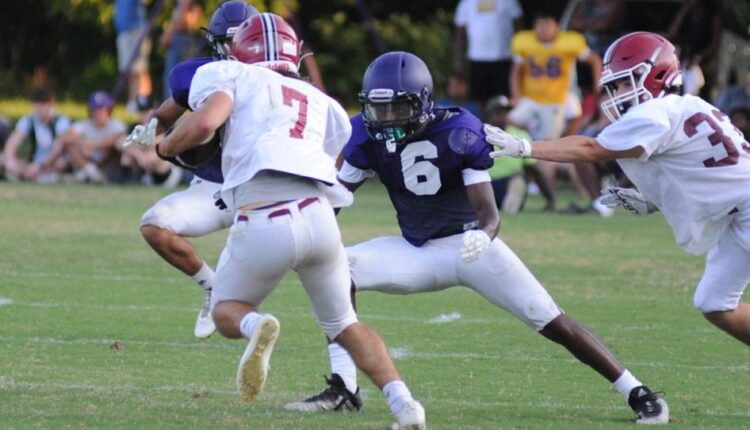 After making names for themselves on the hardwood during the first three years of their high school careers, Columbia Central’s senior trio of Q Martin, Quandrees Peete and Bubba Perkins are getting back to their roots – and the grid – this fall.

Martin, a 1,000-point scorer for the Lions, has been just as dynamic in the short time he’s been with the soccer team since the spring. He has worked at Receiver, Returner and Cornerback and has shown remarkable skills in each case.

“He’s a weapon if we get the ball to him – sweep it back,” said Central interim coach John Moore Tuesday night after a game against the visit to Tullahoma. “We like him on both sides of the ball.”

The six-foot, 175-pounder hasn’t played soccer since high school in Spring Hill, but has given in to peer pressure and has no regrets.

“Everyone wanted me to play. I thought it was my senior year so I decided to come and play, ”he said. “The last time I played was eighth grade at Spring Hill. I was in love with the basketball dream. I had all of my eggs in one basket. I thought basketball was the way to go, but I had to turn into a two-sport athlete. “

While Martin said his athleticism was beneficial in his second sport, he has also shown the ability – and even a desire – to be physical when needed.

“Cornerback is pretty fun,” he said. “I can get a couple of interceptions, a couple of hits.

“I wish I had gotten out in my freshman year.”

His classmates repeated this feeling, pointing to their enjoyment of the game and their new teammates.

“They’re enjoying us getting out of here,” said Perkins, a 6-4, 175-pound receiver / security guard who also dropped football after middle school. “The conditioning was tough. Football (conditioning) is much more difficult. It also takes a lot of mental strength. “

Peete (6-4, 175), who has focused on basketball since a concussion as a fifth grader, had to wear his mother down to play again.

“I love the game,” he said. “I convinced her that it would make me stronger on the basketball court and as a multi-athlete.”

All three, plus sophomore Jordan Davis, shared the chemistry they have quickly established with their soccer teammates.

“I’ve actually been playing football longer than basketball,” said Davis, as did Martin, a highly acclaimed basketball player who recently received an invitation to the CP3 Rising Stars National Camp later this month. “It just goes without saying. I like the environment, I like being a physical player.

“I can also play soccer and basketball with my boys. The chemistry, the bond is there. “

Moore expects all four key roles to play over the course of the upcoming campaign.

“They will have an impact,” he said after Central’s 13-0 win on Tuesday. “We need to do better on our passes, but when we get their hands on the ball, good things will happen. I’m tickled to death that they’re out here. “

They’re just part of Moore’s optimism less than a month after taking over the football program after Jason Hoath was fired on July 12 after five seasons.

Defensively, safety Isaiah Cordle and linebacker Nick Butler showed solid performances on Tuesday, while running backs Kayden McCoy and Nate Hoath had some success in the base game for the Lions.

“If we put it all together, we have a chance for a special season,” said Moore, who served as offensive coordinator when Columbia Central won the 2010 state championship Class 5A in the quarterback position. Our snapshots have to get better.