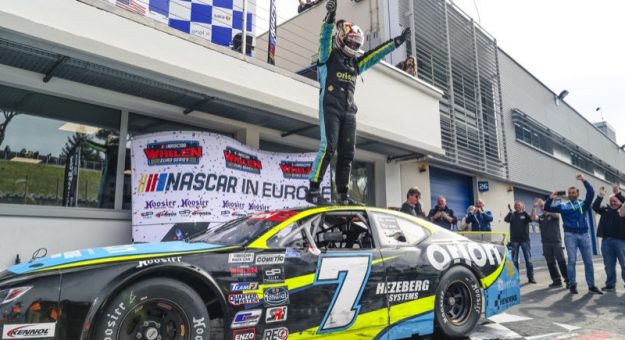 VALLELUNGA, Italy – The EuroNASCAR 2 championship was decided in the last race of the season at the Autodromo di Vallelunga.

Martin Doubek overcame a 13-point deficit on Tobias Dauenhauer by dominating Final 2 and was crowned the new EuroNASCAR 2 champion. The driver of Hendriks Motorsport’s Ford Mustang No. 7 raced to victory and grabbed the beautiful EuroNASCAR 2 Championship Trophy from Tijey.

Doubek entered the NASCAR Whelen Euro Series in 2015 and had his breakthrough in 2020 when he won his first race at Circuit Zolder. Since then, the Czech has become one of the dominant forces in the championship for young talents and gentlemen drivers.

With five race wins in the EuroNASCAR 2 season 2021, Doubek crowned a perfect year with Hendriks Motorsport and won his first big title in the NASCAR Whelen Euro Series.

Drama unfolded from lap 1 to the checkered flag: Doubek got off to a good start and took second place from third place on the grid. Francesco Garisto took the lead in the race when polesitter Dauenhauer was relegated to fifth after being embroiled in the chaos of the first corner that pulled Simon Pilate and Vladimiros Tziortzis out of the race.

With Doubek in second place and Dauenhauer in fifth place, the latter would have taken the championship crown.

The German in the number 50 Ford Mustang from Hendriks Motorsport had to be no worse than third to regain the lead in the standings. On lap seven, Dauenhauer was able to overtake Justin Kunz in fourth place.

The German was pushed back to tenth place and saw his chances of winning the title in smoke and dust. At the end of 15 exciting laps, Doubek grabbed the checkered flag and became the tenth EuroNASCAR 2 champion since the official European NASCAR series began in 2012.

“I’m really happy and don’t know what to say,” said Doubek. “I have no celebrations planned for tonight, but we will definitely celebrate the championship. Right now I’m just speechless and feeling great. Thanks to the entire Hendriks Motorsport crew for a great year in the NASCAR Whelen Euro Series. “

After his dramatic fall in lap 10, Dauenhauer only finished 13th under the checkered flag. As in 2020, the German lost the battle for the championship in the last race of the season and was runner-up in 2021 – a strong 1: 2 final for the Dutch powerhouse Hendriks Motorsport.

The overall podium was completed by Zolder race winner Naveh Talor, who finished second in a crazy race at the Autodromo di Vallelunga. The Israeli had another solid run on his No. 90 Not Only Motorsport Chevrolet Camaro.

NWES veteran Kunz scored his second podium of the 2021 NWES season on his # 22 DF1 Racing Chevrolet Camaro, while Garisto from 42 Racing and Pierluigi Veronsi from Double V Racing rounded off the top 5 of the race. Leonardo Colavita won the race in the Rooky Trophy in sixth place, just ahead of Leevi Lintukanto.

A worrying gap between India’s real and financial markets