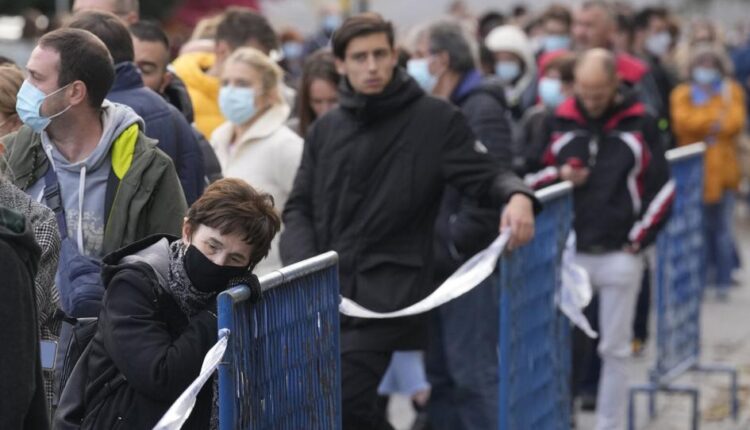 ZAGREB, Croatia (AP) – Central and Eastern Europe battled a spiral of coronavirus cases on Thursday, with several countries setting new daily records in regions with lower vaccination rates than the rest of the continent.

Ukraine, Croatia, Slovenia and Slovakia reported their highest daily case numbers, while other countries recorded the most infections in months.

Most Central and Eastern European countries have vaccinated around half their population or less, which is less than the EU average of around 75%.

Antivirus restrictions have also shifted as governments tried to increase vaccination rates rather than reinstating bans and other tough measures that are widely unpopular and could harm the economy.

In Croatia, authorities reported a daily record high of 6,310 new cases and 32 deaths. Doctors warned that the pressure on hospitals in the country of 4.2 million people was increasing.

Croatian officials said they will announce wider use of COVID passports on Friday, but not a lockdown. The authorities also ordered an expansion of the intensive care and emergency care capacities.

Worried about the increase, many Croatians rushed to vaccination centers in the capital, Zagreb, to get a sting or a booster vaccination.

In neighboring Slovenia, the official STA news agency said hospitals were filling fast and a new record of 4,511 daily infections was reported on Thursday.

Hospitals in the nation of 2 million people have already cut non-urgent interventions to make way for COVID-19 patients. The country has introduced COVID-19 passports for working people, but the government has said rising infections could force lockdowns.

Jelko Kacin, the coordinator for the pandemic response, described the situation as “a dictatorship of a minority of the unvaccinated and irresponsible to the majority who were vaccinated on time and comply with the measures,” STA reported. He announced a tightening of the COVID passport rules.

The Serbian government’s pandemic crisis team met on Thursday as medical experts pushed for a 10-day lockdown and demand for COVID passports for all indoor venues. However, authorities decided to only extend the fall break for school children and extend COVID passports for an additional two hours from 8 p.m. instead of 10 p.m. in bars, restaurants and nightclubs.

Serbia’s populist government is reluctant to tighten pandemic regulations and is focused on getting more people vaccinated. In Serbia, as in Slovenia, vaccination rates are just over 50%.

The Balkan nation of 7 million people has so far reported more than 1 million cases and over 10,000 deaths. 6,100 new cases were registered on Thursday, and 64 people died. Serbian doctors have said in the past few weeks that small babies were also among the ventilated patients.

In North Macedonia, authorities announced they were running virus tests in schools after three teenage girls recently died of COVID-19.

The vaccination rate in North Macedonia was 39% of the 2 million people – one of the lowest in Europe, along with Ukraine with only 17% of people vaccinated out of the 41 million population.

The Ukrainian Ministry of Health reported 27,377 new infections on Thursday, about 500 more than the previous week’s high. There were protests in Ukraine against vaccination certificates for teachers and other officials, as well as for passengers on planes, trains and buses.

Slovakia also reported a record of 6,713 new infections on Thursday. Slovakia has one of the lowest COVID-19 vaccination rates in the EU, with just over 2.4 million people in the country, of which 5.4 million are fully vaccinated.

The government said it would extend the already strict restrictions to nearly half of the country next week. As of Monday, 36 of the country’s 79 districts will have to close hotels, bars, restaurants as well as fitness, wellness and water centers.

Public gatherings in these counties are limited to 100 fully vaccinated people. Face covering becomes mandatory both indoors and outdoors.

In neighboring Czech Republic, the day-to-day increase for the second day on Wednesday reached more than 9,000 cases, the highest since March. The number of hospital patients has skyrocketed.

“We are in a pretty serious situation,” said Health Minister Adam Vojtech on Thursday. “The only solution … is vaccination.”

Cases are also increasing in Poland and Hungary, while Bulgaria has continued to rise for weeks.

Poland reported more than 15,000 new cases in the nation with 38 million and 250 deaths, numbers last recorded in April. Almost 53% of Poland’s population are fully vaccinated.

Hungary said 107 people died of COVID-19 between Wednesday and Thursday, the highest daily total since May 5. The authorities confirmed 6,268 new infections, about 2.5 times more than last Thursday.

Bulgaria reported 4,922 new cases on Thursday and authorities said 86% were unvaccinated. Only 28.5% of Bulgaria’s 7 million inhabitants are fully vaccinated.

After battling a major outbreak for weeks, doctors in Romania said they were exhausted and struggling to cope with both full hospitals and anti-vaccination propaganda.

Cristian Oancea, a doctor at Victor Babes Infectious Disease Hospital in Timisoara, told the Associated Press Thursday that many unvaccinated patients regret not having been vaccinated when in hospital beds.

He said they told him, “I’m a fool for not getting vaccinated.”

AP reporters across Central and Eastern Europe contributed to this report.

Keller reacts to problems in the region | News, sports, jobs