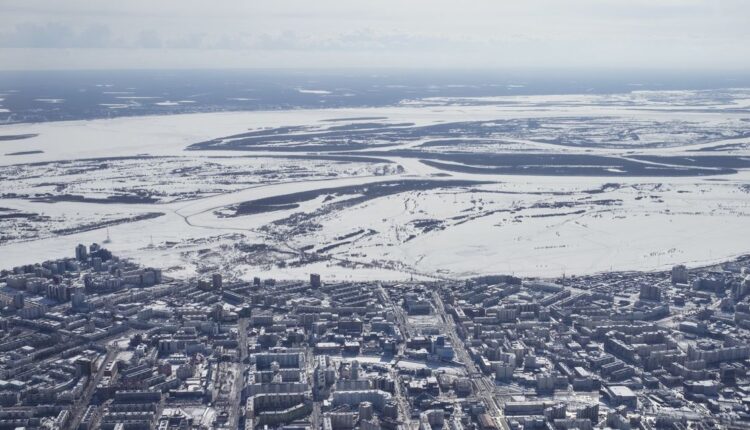 YAKUTSK, Russia—Thawing earth once thought to be permanently frozen is springing to life and threatening a crucial chunk of Russia’s economy.

The melting of the thick layer of the earth known as permafrost is a result of climate change, according to scientists and Russia government research. Two-thirds of the country sits on such soil, including much of its oil and gas infrastructure. Since 1976, Russia’s average temperature has risen 0.92 degrees Fahrenheit per decade, or 2½ times faster than the global pace, government data shows.

Mines and plants are experiencing increasing corrosion leaks and cracks, stemming in large part from defrosting ground. In the pipeline industry, braces and other mechanisms, previously anchored into permafrost, often corrode, twist and bend when the earth below changes, according to ecologists and other researchers. Companies are pouring millions of dollars into reinforcing buildings, monitoring soil temperatures and installing high-tech cooling systems.

Pedestrians cross the street in the center of Yakutsk, Russia. 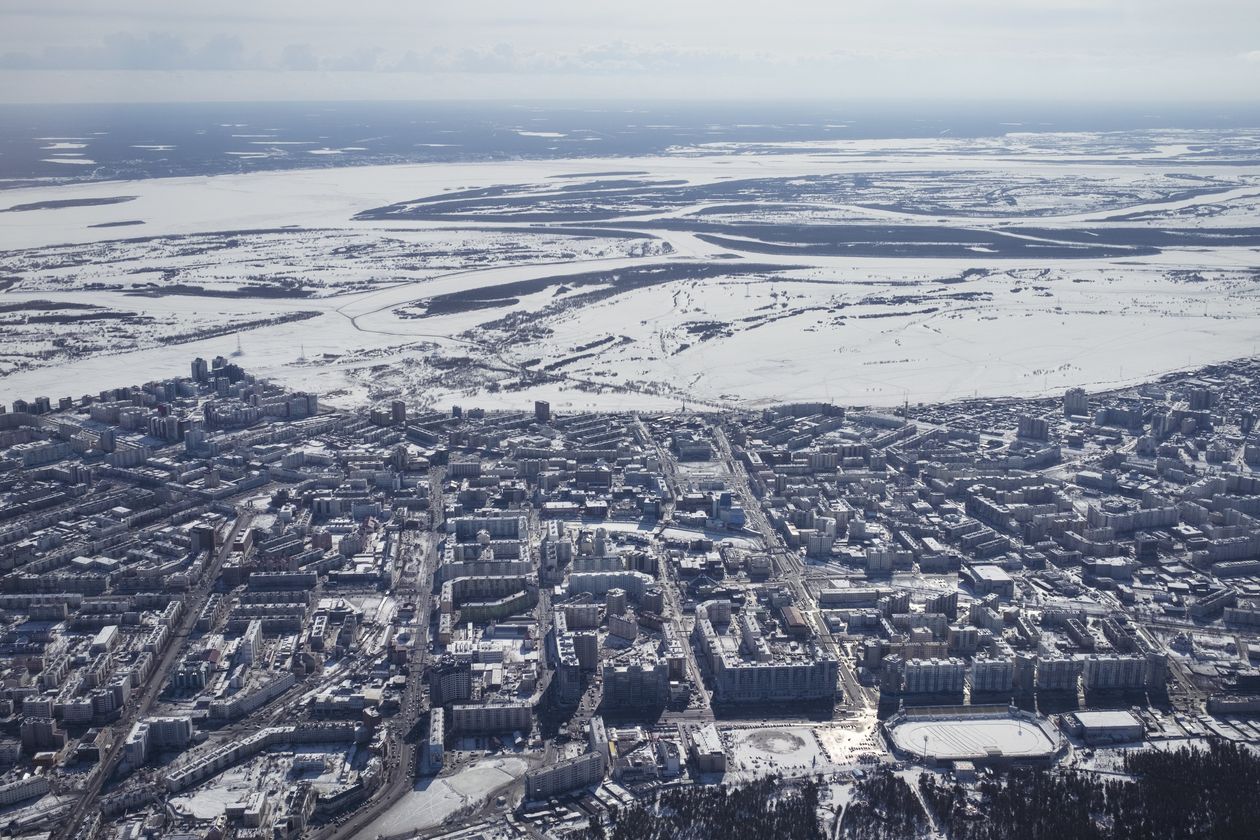 The city of Yakutsk faces infrastructure challenges due to permafrost.

The phenomenon was a contributor to the largest ever spill in the polar Arctic in spring 2020, when damage to a diesel fuel storage tank in remote Siberia caused 20,000 tons of fuel to leak.

After the spill, Russian President

declared a national state of emergency and the country’s Prosecutor General ordered regional prosecutors to inspect all hazardous facilities built on permafrost. Russia’s Investigative Committee, the nation’s main investigations agency, later blamed the incident on negligence and poor maintenance. Officials at the

mining company that operates the installation—along with some government scientists and elected officials—said thawing permafrost caused the failure of posts supporting the basement where the storage tank laid.

“In the near past, everybody believed that permafrost would have an impact on infrastructure by the end of the century. Now we know we don’t have much time,” said Vladimir Romanovsky, professor of geophysics at the University of Alaska Fairbanks. “Oil, gas, villages—it’s all on the line.”

Russian economic officials and scientists estimate that thawing permafrost could affect more than a fifth of Russian infrastructure. The economy stands to lose more than $68 billion by 2050, a government minister said in May. The government says that 40% of buildings and infrastructure facilities in permafrost-covered areas have already been damaged.

Aging Russian buildings and equipment, much dating to the Cold War, don’t help matters. “We must be prepared for this,” said Mr. Putin during a nationwide address in June. Last month, he ordered the creation of a national permafrost monitoring system to analyze data from 140 stations. 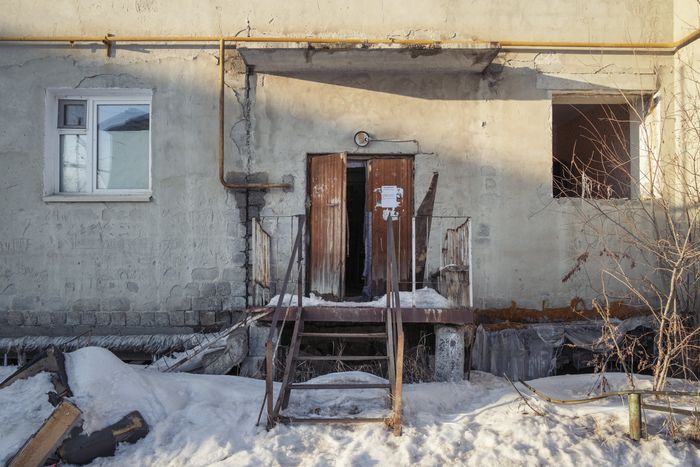 Homes like these, on Avtozavodskaya Street in Yakutsk, often suffer cracked walls.

In Yakutsk, capital of the Northeast region of Yakutia, residents describe water pipes that regularly burst, creating fissures and holes in buildings. Roads buckle as moisture seeps in from below, leading to cracks in the asphalt. Trains run at slower speeds because of deformed tracks, local engineers said. Flooding was behind the resettlement of at least one waterlogged village from the basin of the remote Kolyma River.

Across the countryside, the effect of permafrost is plain to see. Thawing ice has transformed farmland into swamps and rivers swell in springtime with up to 30% more runoff compared with the 1980s, local scientists said. In villages, locals who previously stored meat and other perishables in cellars dug deep into the ground now must use ordinary deep freezers because of waterlogged subsoil.

For funerals, residents for centuries had to dig to approximately 5 feet underground, and then burn wood to heat the soil to suitable softness required to bury the dead. These days, there is no need for the second step, said local ecologist Valentina Dmitriyeva. 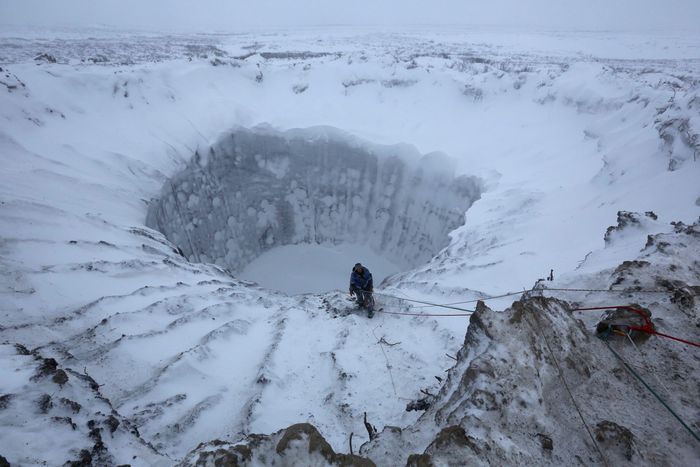 Vast Siberian craters, such as this one photographed in 2014, can form when underground gas bursts through soft, thawed earth.

Permafrost, so named because it is a permanently frozen thick layer under the earth’s surface, consists of soil, rock or sediment that usually remains below freezing for more than two years. It can be found near dry land and under the ocean floor, anywhere from an inch to several miles beneath the surface. It is most common in historically frigid places such as Russia, the Alps and China’s mountainous regions.

The softening of the soil is both a result of global warming, and emits gases that contribute to it, according to the U.S. Environment Protection Agency. As permafrost thaws, the remains of plants and other organic material decompose, releasing methane and carbon dioxide into the atmosphere, the EPA says, exacerbating the matter.

In some areas, thawing ground can give way to craters. Scientists say the likely reason is the steady buildup of underground gases able to burst through soft upper permafrost layers.

In Alaska, the top layer of permafrost at the northern sensor site of Deadhorse has warmed by 1.5 degrees Fahrenheit per decade since the late 1970s, according to U.S. statistics. Foundations of Alaskan homes have been unsettled while highways and railroad tracks require repair due to cracking, heaving and sinking. Canada’s northern Arctic has experienced damage to homes, roads, indigenous cultural sites and the marine environment.

For some of Russia’s biggest businesses, adjustments for permafrost are already under way. 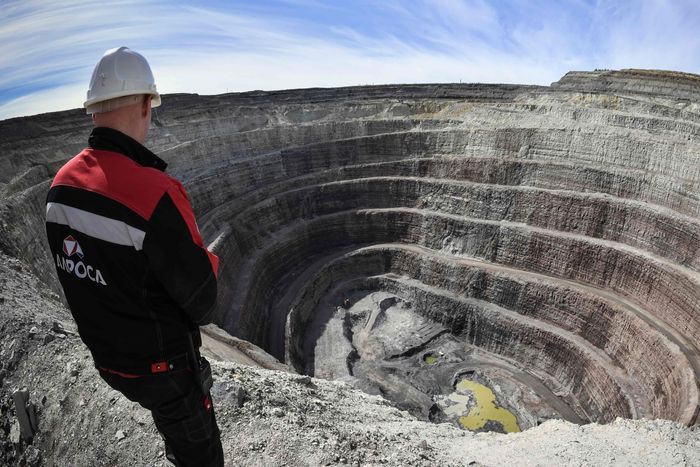 An employee stands on the edge of a Siberian diamond mining pit, where energy giant Alrosa pulls diamonds from the permafrost with the help of explosives.

Alrosa, one of the world’s largest diamond producers, has 82% of its reserves in permafrost areas, according to

The company says it has added “freezing columns” to its mines; the columns connect to refrigeration stations on the surface and shoot coolant dozens of feet beneath the ground to firm up the earth.

Alrosa has what it calls a Permafrost Surveillance Unit in Siberia to monitor the soil temperature in 4,800 wells. Another miner,

says it is building structures on stilts, to better adapt to shifting ground.

For oil-and-gas companies, permafrost interferes with both the extraction of resources and subsequent transport.

Around 90% of the gas production of state-controlled energy giant PAO Gazprom is located in permafrost-covered provinces, according to Morgan Stanley. At its Bovanenkovskoye field, a vast facility in Northern Russia that Gazprom hopes will last for another century, the company has installed 1,000 vapor-liquid cooling units, a system of underground pipes to circulate a refrigerant compound and ensure the ground stays frozen.

Alexander Sobul, a professional diver and underwater repairman for pipeline infrastructure in Yakutia for four decades, said he’s noticed increased cracking and deformation during his dives. He blames the loosening of previously-dense soil surrounding pipelines. “The welding doesn’t hold up,” Mr. Sobul says.

Morgan Stanley researchers say melting permafrost and related infrastructure degradation could harm Russia’s credit profile. The oil-and-gas sector contributes as much as one-fifth of the nation’s gross domestic product, while fuel and energy products make up the majority of Russia’s exports.

“You can see that the companies take it very seriously,” said Willem Visser, a credit analyst at asset manager T. Rowe Price. Mr. Visser has added metrics of permafrost risk to his analyses of Russian energy companies.

‘The building was shaking’

The effects are particularly acute in Yakutia, the vast northeast Russia area of 1.2 million-square miles, five times the size of France. Yakutia’s capital of Yakutsk is the coldest constantly inhabited city in the world; temperatures fall to below 40 degrees Fahrenheit for at least three months each year. The region this summer made headlines for out-of-control wildfires which further thawed the soil, scientists say.

When the first crack appeared in the ceiling of her weatherworn Yakutsk apartment, Larisa Tikhonova paid it little mind. 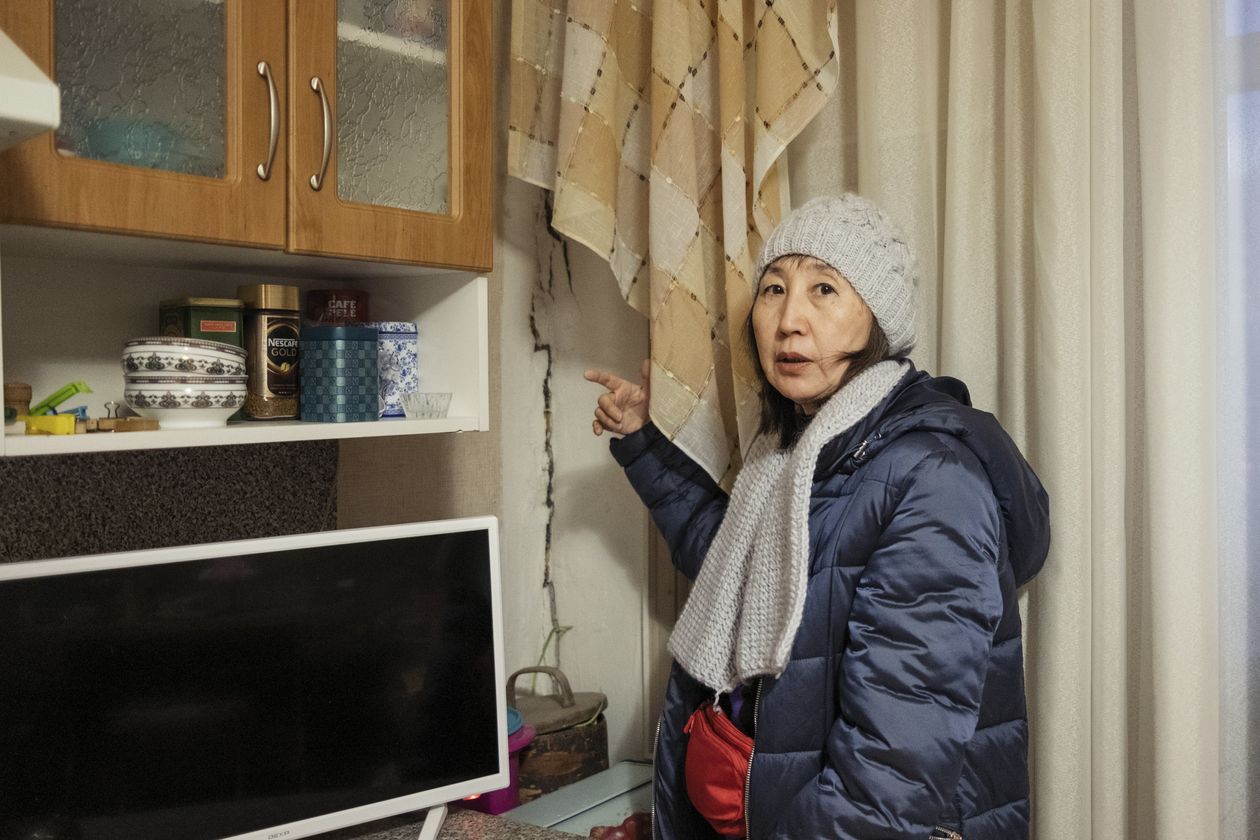 Larisa Tikhonova has been waiting eleven years for repairs to her damaged apartment. 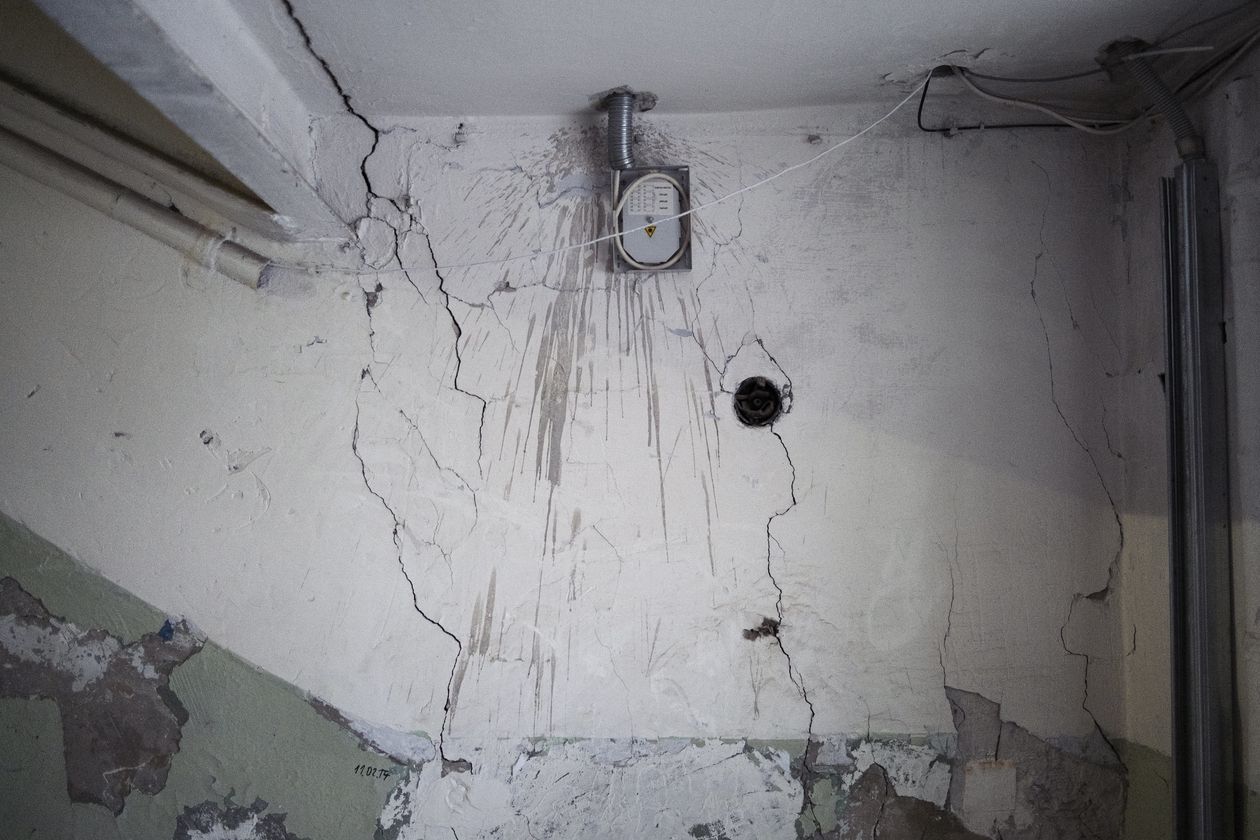 Cracks stutter the hallway of a building in Yakutsk.

Shortly after, the cracks multiplied, spreading across newly formed crevices on the wall of her 1950s-era kitchen. Later, a stench rose from standing water under the four-story building. Ms. Tikhonova and her neighbors called emergency services, and even sued the government of this city of 300,000 in remote northeast Siberia, but no help came. She has been waiting for 11 years.

Other locals say they too are accustomed to hearing groans or pops as buildings lean and walls crack. Fewer than three dozen of Yakutsk’s 2,000 concrete apartment buildings were deemed safe when tested roughly 10 years ago, the ecologist Ms. Dmitriyeva said, and few repairs have been made since.

On a walk earlier this year through Avtodorozhnaya Street, a quiet residential neighborhood, local construction engineer Eduard Romanov surveyed corrosion nibbling at the foundation of a two-story apartment building. In summer 2020, the building was marked as uninhabitable by local officials after a foot-wide fissure appeared on the front facade while residents were still inside.

Security guard Eduard Kirillin was among them, sitting at his computer drinking tea in the apartment his parents owned, when he heard a loud cracking sound. Worried the roof had caved in, Mr. Kirillin ran into the street with other neighbors, only to discover the side of the building splitting apart.

“I remember earlier seeing water pipes leaking under the building,” Mr. Kirillin said. “It was always wet under there. And the night before the accident, it was as though the building was shaking,” he said.

One month after the incident, residents were allowed to return to salvage belongings. Mr. Kirillin, said his parents were compensated the equivalent of around $42,600 by the local government. The building was demolished this summer. 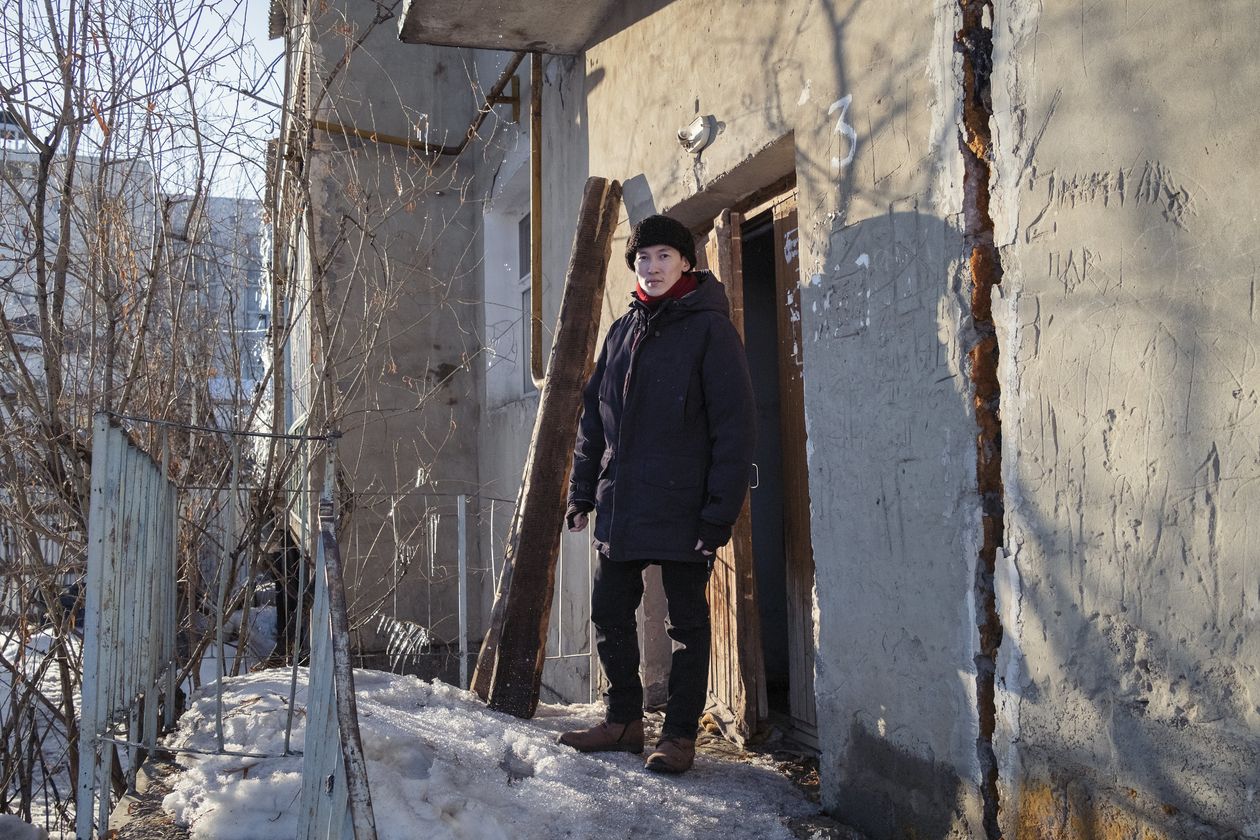 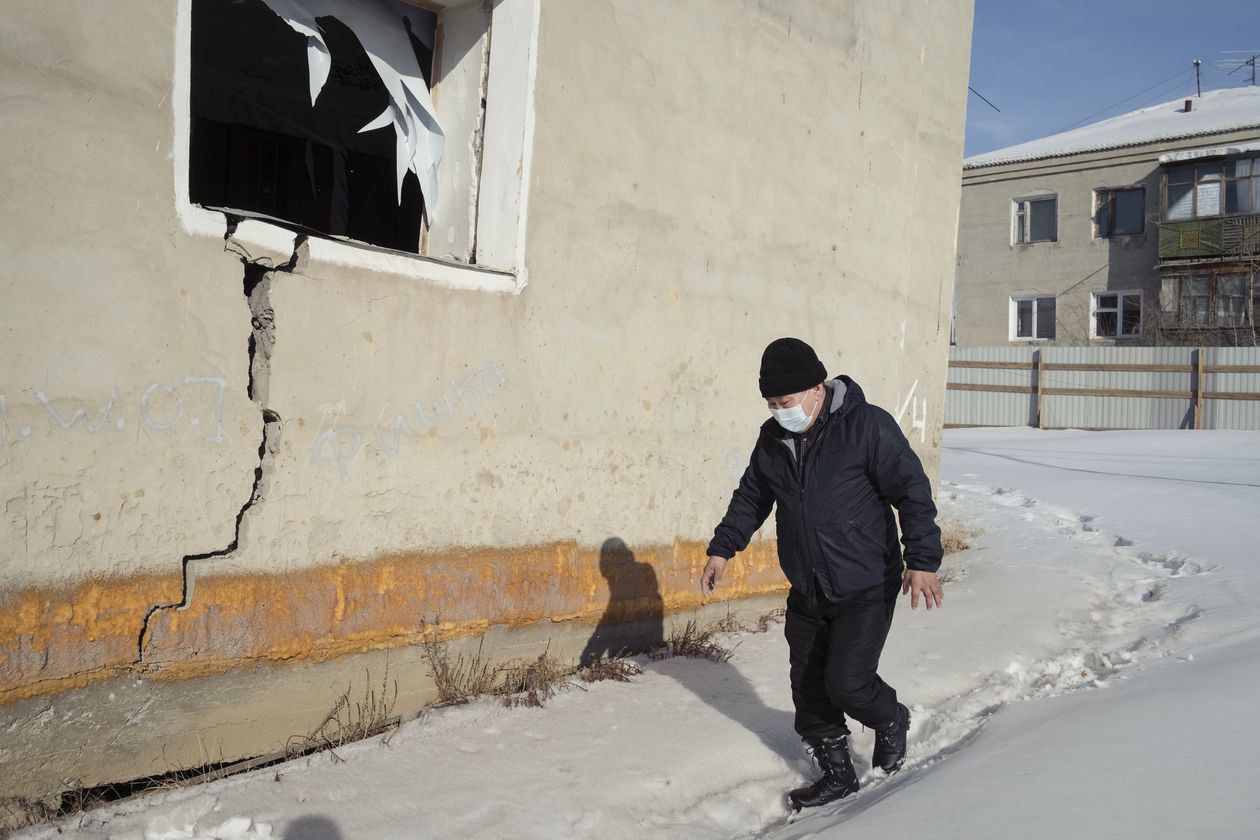 Houses in Yakutsk could once safely be built on piles sunk 26 feet into frozen ground, Mr. Romanov said. Nowadays, they must be dug in at almost 40 feet.

Roughly 3 miles away on Lenina Street, in a corner apartment two floors above Ms. Tikhonova, Viktor Polyanichko’s parents are surrounded by deterioration. Their apartment, Mr. Polyanichko said, “has big cracks everywhere. The doorway is skewed. And my parents say they can hear the beams cracking above.”

Neither Mr. Polyanichko nor other residents could assign certain blame. The State Building and Housing Supervision Authority of Yakutia estimates that 99 percent of cracks in homes can be traced to poor building maintenance. “The most important thing is management,” said Vlad Permyakov, the agency’s first deputy head.

Local ecologists and scientists, as well as engineers such as Mr. Romanov, said thawing ground was a major factor. “Building basements is very difficult,” said Valery Lepov, director of research-focused Larionov Institute of the Physical-Technical Problems of the North. “We can do this only in some places where there is not a lot of thawing.”

In summer 2020, seams burst on a local fuel tank connected to an electrical power station in the remote Yakutia village of Argakhtakh. Some five tons of diesel fuel flooded into the surrounding soil and a nearby river.

The district prosecutor investigated the spill and determined that it resulted from the failure of district officials to promptly detect that the fuel storage tank showed signs of erosion, a telltale sign of thawing permafrost. 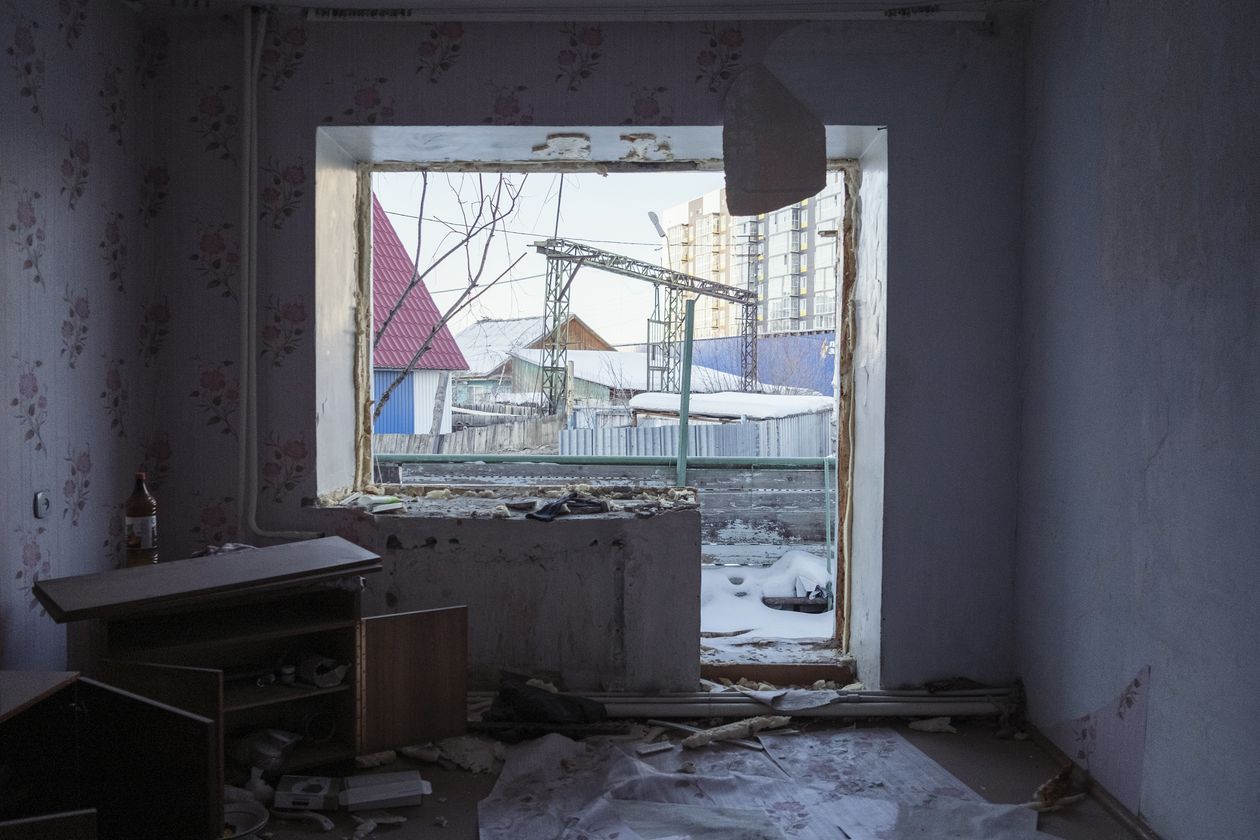 An window frame lays empty in an evacuated apartment building in Yakutsk.

—Valentina Ochirova contributed to this article.