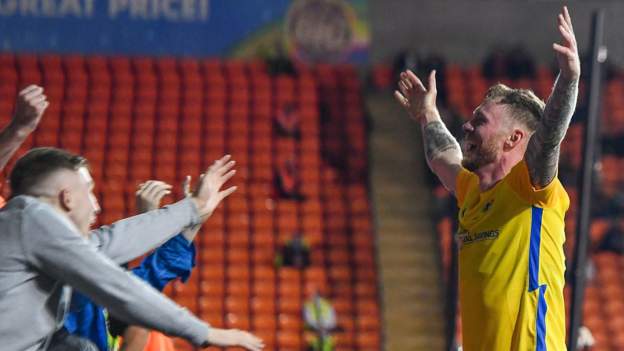 Aiden O’Brien scored a hat trick when Sunderland defeated Blackpool and reached the third round of the Carabao Cup.

Shayne Lavery put the hosts ahead as he poked home in the box after a good job by Tyreece John-Jules.

Sunderland equalized moments later when O’Brien shot flat after a clean through pass from Dan Neil.

The visitors led when O’Brien’s shot was deflected by Daniel Gretarsson before Josh Bowler’s late equalizer, but O’Brien fought to win.

It was the perfect start for the hosts as Lavery hit the net with an impressive finish from an acute angle, but their lead did not last long.

The Black Cats sliced ​​open the Blackpool defense with one flowing swipe, with O’Brien getting behind two defenders and firing a cool low shot that deservedly got them back on par.

However, there was later drama when Bowler found the net with three minutes of normal playtime after playing a clean one-two with John-Jules in build-up.

But the action didn’t end there when O’Brien cheekily drove home up close to help the League One squad through.

“I thought it was a really good football game. I’ll be honest, if we don’t play well and we get beaten by the better team, I say.”

“I think the best team lost tonight. I think we were the better team, created better chances, but we don’t have that luck at both ends of the pitch.”

“I don’t know how we conceded three goals because the goalkeeper wasn’t very busy.”

“I’m very happy for Aiden O’Brien. I thought maybe he didn’t get the recognition he deserved last season. Charlie (Wyke) took his chances, but often he played better.

“He deserves more credit for Charlie’s goals (25 leagues). We gave him that internally that he was a really good player.”

“Every win is important, it really is. We are always trying to win the trust of the fans and that can be very strong.