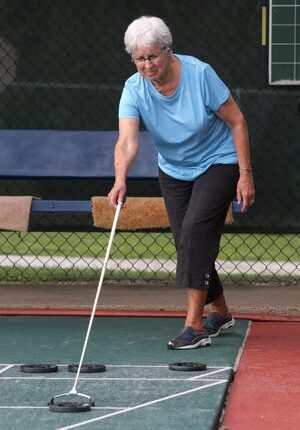 Then they chose a cue from the area and placed black and yellow discs on one of the eight places that slide on the pearls. Teams, usually two players, toss four discs each until they reach a winning number.

Josh Hirschman and his daughters – Harper, Hadley, and Harlow – only started playing together a few weeks ago. Hirschman, who played shuffleboard as a kid, decided to check out the local courts, and his 14-year-old daughter Harper said they were “catching on pretty quickly”.

“Anything that makes the family do something outside is great,” said Josh Hirschman.

Marvin McConnell, the shuffleboard supervisor for Canton Parks and Recreation, agrees. He is promoting Shuffleboard as a “family-friendly game” to attract younger players and trying to make Canton shuffleboard courts popular. He’s holding a family day on September 18th.

“It’s a game anyone can play”

McConnell, who has played the game since he was three and competed in tournaments across the state and nation, said shuffleboard is accessible to people of all ages and athletic ability.

It’s one of the few sports that multiple generations can play together. Shuffleboard can provide social and physical activity for seniors and provide math exercises for children, he said.

“It’s a game anyone can play,” said McConnell.

Family day is for beginners with registration from 8:30 a.m. and games from 9 a.m. in Weis Park, 2600 Harvard Ave NW. There are prizes including a $ 30 gift card for first place and a pizza and catering lunch from Hog Heaven.

The fenced-in areas in Weispark are regularly open to the public on Mondays, Tuesdays and Thursdays from 5 p.m. to 8 p.m. McConnell offers free first come, first served lessons and equipment. He can be contacted at 330-323-1700 to arrange lessons for a large group.

On site, McConnell said, interest in the sport grew when he started working as a supervisor two and a half years ago. But as aging players stopped playing and the competition decreased, so did the number of people on the shuffleboard courts.

Lola Ryan, from North Canton, said that she and her husband started shuffleboarding about four years ago at the encouragement of a friend. They play in Akron and Canton and in Florida where they spend the winter.

“Anyone can play it,” said 88-year-old Ryan, but there is a general belief that shuffleboard is only enjoyed by the elderly.

“Everyone thinks it’s an old people’s game,” she said.

Bob Jones, a Hinkley resident and first vice president of the Ohio State Shuffleboard Association, said the reputation is slowly changing. There were also more people at tournaments the association held over the past six years – but not as many as in the 1970s and 1980s.

Jones said he believes more opportunities to stay active and social have made shuffleboard struggling. He has been playing in tournaments since he was two and has “persevered” with age.

“It’s a fun, fun community of people,” he said.

McConnell’s goal is to expand that community through word of mouth and events like Family Day next month to ensure a strong future for the sport.

“I try to encourage people to play shuffleboard because it’s a good family-friendly game,” he said.

Are there any signs of a slowdown in the economy?