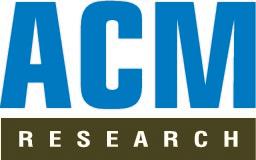 FREMONT, Calif., Aug. 17, 2021 (GLOBE NEWSWIRE) – ACM Research, Inc. (“ACM”) (NASDAQ: ACMR), a leader in wafer cleaning technology for advanced semiconductor devices, today announced an update on the status of the proposed Initial public offering (the “STAR Market IPO”) and the listing of the shares of the operating subsidiary of ACM ACM Research (Shanghai), Inc. (“ACM Shanghai”) on the Sci-Tech InnovAtion Board of the Shanghai Stock Exchange (the “STAR Market”) ).

The China Securities Regulatory Commission (“CSRC”) has announced that ACM Shanghai has received approval to register for the STAR market and will soon enter the process of granting the STAR market IPO. ACM estimates the issuance process will be completed in the next few months, but when it will depend on numerous factors beyond the control of ACM Shanghai.

Dr. David Wang, President and Chief Executive Officer of ACM, commented, “We are pleased that ACM Shanghai has completed CSRC registration and is entering the final stage of the issuing process for its initial public offering in the STAR market. We are confident that our listing on the STAR Market, combined with the continued listing of ACM’s Class A common shares on the Nasdaq Global Market, will accelerate our mission to become a global player in the semiconductor equipment industry. “

ACM develops, produces and sells semiconductor processing equipment for wet cleaning of individual wafers or batches, electroplating, stress-free polishing and thermal processes, which are of decisive importance for the advanced manufacture of semiconductor components as well as for wafer-level packaging. The company strives to deliver bespoke, high-performance, and cost-effective process solutions that semiconductor manufacturers can use in numerous manufacturing steps to improve productivity and product yield.

The statements in the second and third paragraphs of this press release regarding the closing and timing of the initial public offering of STAR Market and the listing of its shares on STAR Market by ACM Shanghai are not historical facts and constitute forward-looking statements within the meaning of the Private Securities Litigation Reform Act dated 1995. These statements, which are only expectations, reflect management’s current beliefs, are based on certain assumptions, and involve risks and uncertainties. ACM Shanghai may not be able to complete its IPO and listing on the STAR market for a number of reasons, many of which are beyond ACM Shanghai’s control, and each of which is exacerbated by the ongoing COVID-19 pandemic in China and around the world could be. Among other things, ACM Shanghai is required to obtain additional Chinese government approvals necessary to allow its initial public offering and listing on the STAR market, with one or more approvals from regulators for reasons outside of ACM Shanghai or those not known to ACM Shanghai , refused or significantly delayed. The application for admission to the STAR-Market can also be rejected or delayed by the CSRC at its own discretion. ACM assumes no obligation to publicly update these forward-looking statements to reflect events or circumstances that occur after the date of this document or to reflect changes in its expectations with respect to these forward-looking statements or the occurrence of unforeseen events.