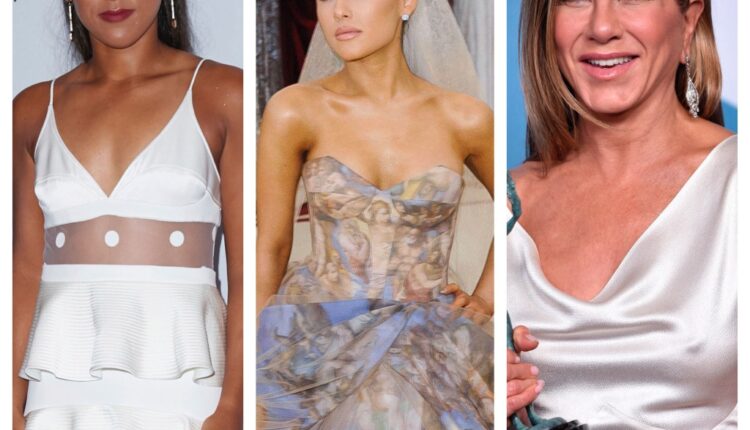 The celebrity beauty market saw an influx of new entrants this year, with the likes of Jennifer Aniston, Halsey, Jennifer Lopez, Scarlett Johansson and many others making their first solo ventures in the industry.

While last year’s celebrity beauty launches largely stayed within skin care, this year saw many stars experiment in virtually all categories, including the traditional makeup, skin and hair categories, as well as wellness and baby.

Most recently Ellen DeGeneres revealed during her talk show on Tuesday that she is launching her Kind Science skin care brand later this month. Aniston, who was behind one of the most popular hairstyles of the ‘90s, leveraged her influence for her own hair care line, LolaVie, which launched last month.

Here, WWD looks at 18 celebrities that launched beauty brands in 2021. Read on for more.

“My mom, my aunt, my grandmother, all of them used olive oil as a beauty product [on] hair when it got too dry, on your face and your body, on the belly when you’re pregnant,” Lopez told WWD. “What it does for the skin is amazing, [but] nobody wants to smell like a salad. So, it was like, how do we take the olive and create something that is proprietary to us?”

Halsey at the MTV Video Music Awards in 2019.
Evan Agostini/Invision/AP

Halsey kicked off the year of celebrity beauty brands with the launch of her makeup brand, About-Face, in January. The singer teamed with Jeanne Chavez and Dineh Mohajer, the founders behind Hard Candy and Smith & Cult, to launch the brand initially with three color collections that offered glitter and metallic options.

The singer has become known for her constantly changing beauty look. A self-proclaimed beauty junkie, Halsey has regularly sported glittery and graphic makeup looks and many colorful hairstyles over the years.

The brand has since expanded to all makeup categories and has embarked on a yearlong partnership with beauty subscription service Ipsy, which has included About-Face products in its Glam Bag X initiatives.

“All of these things help you live the best, more fulfilled life or they aid you to be able to do that,” Upton told WWD. “Everyone is so busy these days and having that extra energy boost and obviously immune support is so important right now, being able to recover from a long day with your kids or working out or stressful work and having that restful sleep.”

Priyanka Chopra Jonas ventured into the hair care category this February. The actress launched her hair care brand, Anomaly, exclusively at Target and teamed with beauty brand creator and incubator Maesa for the line.

Sustainability is at the core of the brand, and each product is housed in recyclable bottles with the shampoo and conditioner bottles using 100 percent PCR content and the hair mask using 70 percent. The line is also meant to be accessibly priced, with all products at $5.99.

“We are going to constantly push innovation to be able to reach a place where we’re amazingly sustainable, but at the same time have superior product for a very affordable cost,” Chopra Jonas told WWD. “We’ve spent less on the bottle and spent so much more on the product. And it’s better for the earth than most. It’s a step in the right direction, and you can afford it. I think it’s the trifecta of that — that was the gap for me.”

Influencer and designer Olivia Palermo debuted her namesake beauty brand in May, which she created in partnership with Paris-based Marie Claire Beauty Group. The skin care and makeup line launched direct-to-consumer with four products, including an illuminating serum, a matte lipstick, a mattifying mist and an eye shadow palette.

“I wanted to create a beauty line that follows my own ethos on fashion — something that fits my mood, but also provides a timeless look that everyone can rely on in a pinch,” Palermo told WWD in a statement. “It’s a collection that mirrors my beauty routine, focused on elevating the essentials. My approach is trying to find innovative solutions that work not just for me, but for the many, diverse women (and men) that make up our global community. We all have different skin types at all ages. Let’s create heirloom products for everyone.”

Actress Vanessa Hudgens and singer Madison Beer teamed this June to launch DNA-based skin care brand, Know Beauty. The women teamed with dermatologist and chief medical officer Dr. Karen Kagha to create the brand, which offers an at-home DNA kit that gives customers a recommended regimen of beauty products based on their results.

“We wanted to join forces and create something that made it easy for girls like us or guys or whoever to be given the answers that they’ve been looking for, and how to actually take care of their personal skin, because everyone’s skin is different,” Hudgens told WWD in an exclusive interview. “When your skin looks great, you feel great. It’s something that we want everyone to be able to feel.”

Oscar-nominated actress Scarlett Johansson revealed this June that she is developing a beauty brand, slated to release early next year. The brand is being funded by The Najafi Companies, which is the same minority investor behind Beach House Group.

Johansson did not reveal what the unnamed beauty brand will entail, but in a statement to WWD said: “I’ve been fascinated by the transformative power of beauty since I was a child. My mother instilled in me a passion for self care from my early teenage years. Several years ago, I took a step back from my beauty deals with the goal of creating something true to me. The result is a clean, accessible approach to beauty.”

Proudly offers baby skin care and diaper products that specifically cater to babies with deeper skin tones. The line is slated to launch direct-to-consumer this year and more widely in the mass market next year.

“As we continue to work on new endeavors together, our goal is to always center our work around being the change we want to see while championing diversity, equity and inclusion,” the couple told WWD in a statement. “With Proudly, we’re proud to have a range of products that caters to the unique skin care needs of children of color that are so often overlooked in the mass market.”

Pop star Becky G partnered with Madeby Collective to create her color cosmetics brand, Treslúce Beauty, this June. The brand debuted in the eye category with an eye shadow palette, eyeliner, makeup brushes and false eyelashes. The brand is inspired by the singer’s Mexican heritage with its packaging drawing inspiration from Talavera pottery.

“What I really wanted to do with this capsule collection was relive my teenage nostalgia,” Azalea told WWD. “If I was gonna put on a baby pink eyeshadow in the early 2000s, I would have sat there all day long, and it never would have been as bright as what it is now. We’ve come so far with that.”

“I’m so excited to share Kinlò with you! I founded Kinlò to address a public health need around skin cancer prevention within our POC communities,” Osaka said in a statement on the brand’s Instagram account. “Tennis can be challenging at times, but it has given me this platform which I am so grateful for. It allows me to help others in ways I wouldn’t have imagined otherwise.”

Kylie Jenner expanded her beauty empire this September with the launch of her Kylie Baby line. The line launched with four clean, vegan and hypoallergenic products, such as a gentle shampoo, gentle conditioner, bubble bath soap and moisturizing lotion.

Jenner already runs her successful Kylie Cosmetics and Kylie Skin brands, as well as her Kylie Swim brand. She is pregnant with her second child with boyfriend Travis Scott.

Jennifer Aniston is one of the many celebrities that has been highly influential in the beauty world, spurring the trend in the late ‘90s of the “Rachel” haircut, which was the hairstyle she sported during her first few seasons of the hit show “Friends.”

Aniston leveraged her well-known hairstyle to enter the hair care category in September with the launch of her LolaVie hair care brand. The brand launched with one product, its Glossing Detangler made with ingredients like chia, bamboo, lemon extract and a superfruit complex to protect that hair, add shine and detangle.

After teasing the brand on social media, Ariana Grande revealed to fans in September that she is launching her own beauty brand, called R.E.M. beauty. The brand is being made in partnership with Forma Brands, the beauty incubator behind Morphe, Morphe 2, Bad Habit and others. A release date has not yet been revealed, however, the brand will launch with products in the eye category, including eyeliner, eye shadow and mascara.

Toni Braxton at the American Music Awards in 2019.
Jordan Strauss/Invision/AP

Grammy-winning musician Toni Braxton ventured into the body care category this September with a vegan line called Nude Sugar available at Ulta Beauty. The line launched with nine products, including two body creams, a body serum, a shower gel and a hair mist. Braxton had worked on the brand for two years prior to its launch.

“My skin as an African American tends to be a little drier,” she told WWD about why she wanted to create the brand. “Since I’m getting up there, just going outside in the sun, and all the years of the things that I’ve done to my body being in the entertainment business, for me, it was having hyperpigmentation or sometimes you get light spots.”

Longtime talk show host Ellen DeGeneres is the latest celebrity to launch their own skin care line. DeGeneres announced the line, called Kind Science, on her talk show in October, describing the brand as “age-positive skin care.” The brand is launching in late October and a product lineup has not yet been revealed.

The Best Beauty Looks From the 2021 Met Gala